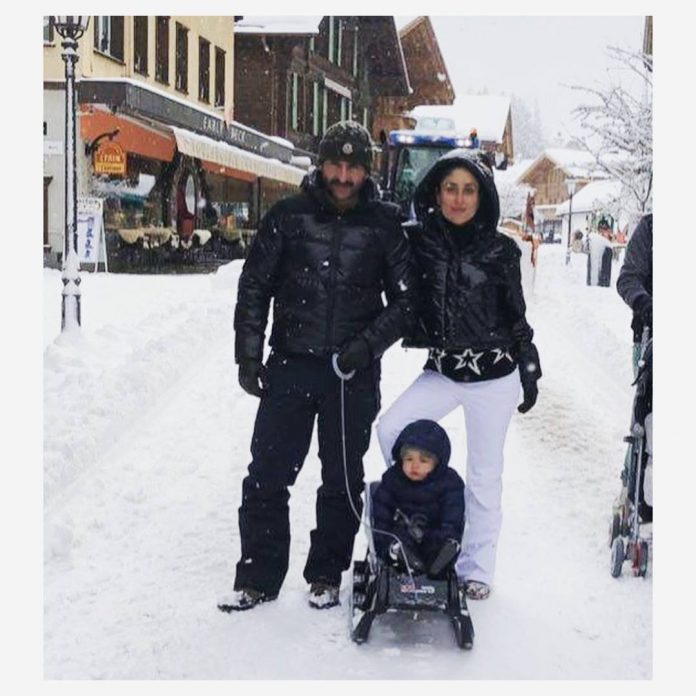 Saif Ali Khan, Kareena Kapoor and son Taimur Ali Khan often holiday together at different places. One of their favourite destinations for holidaying is Switzerland. After having an intimate birthday celebration of Taimur Ali Khan at Pataudi, the family is having a snowy holiday at the picturesque locations of Switzerland.

Kareena Kapoor shared an adorable picture of their holiday on Instagram. Little Taimur can be seen enjoying his first experience with snow, as he sits on a snow sledge. Saif Ali Khan can be seen posing in trendy warm outfits, while Taimur looks adorable as he twins with father Saif.

Taimur celebrated his first birthday on December 20, 2017 amidst close family members at Pataudi. Aunt Karisma showed off various glimpses of the party, which included Sharmila Tagore and Babita Kapoor along with other members of the Kapoor and Khan family.

On the work front, Saif will be promoting his upcoming film Kaalakaandi directed by Akshat Verma and also stars Akshay Oberoi, Kunaal Roy Kapur and Deepak Dobriyal. The film is due to be released on January 12, 2018. Kareena Kapoor is also looking forward to her film Veere Di Wedding which also stars Sonam Kapoor and Swara Bhaskar and is ready to be released on May 19, 2018.