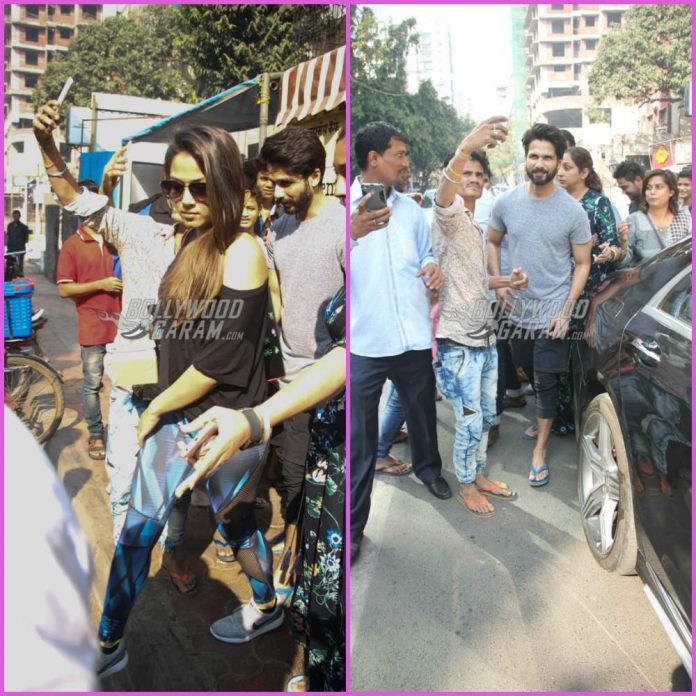 Shahid Kapoor and Mira Rajput have been the favourite of fans and have always grabbed attention with their charm. The couple was mobbed by fans when they were out on a casual outing in Mumbai on January 1, 2018. Shahid and Mira were out on a coffee date and were surrounded by fans as they made their way towards their car.

Mira looked pretty in a printed leggings and black cold-shoulder top while Shahid was seen in a grey t-shirt and black track pants. The Mausam actor also obliged with a few fans for selfies. Shahid’s wife has been in news ever since she got married to Shahid. The Jab We Met actor in a recent interview got candid about his relationship with Mira.

Shahid said, “She is the first girl I met, for marriage specifically. I mean, I was meeting a lot of girls organically – I was not in a boy’s hostel. I was living in Mumbai with my own pad, alone since I was 23. I was 34 when I met Mira and ready to grow up.” On the other hand Mira said, “I am the audience in the relationship, he is the star. But fortunately, I think he is very receptive to me, I really enjoy it when we get together and chat about things.”

The two are now parents to an adorable daughter Misha. Shahid Kapoor is currently looking forward for the release of his film Padmavati and will also be seen in the upcoming film Batti Gul Meter Chalu, which will be released in theatres in August, 2018.