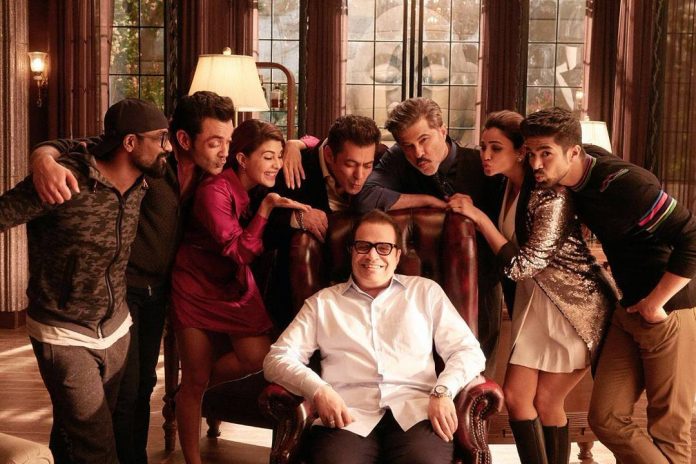 Producer Ramesh Taurani is celebrating his birthday on January 17, 2018. As the upcoming film Race 3 is under production, the entire cast of the film gathered and wished the producer in a unique way. Lead star Salman Khan shared a cute picture which features the cast and Ramesh Taurani sitting on a chair.

Ramesh in the picture can be seen sitting on a chair and is surrounded by the cast including Salman, Daisy Shah, Bobby Deol, Anil Kapoor, Jacqueline Fernandez, Saqib Saleem and director Remo D’Souza. Salman Tweeted, “Wish you a very happy birthday @RameshTaurani”. The film Race 3 went on floors about three months back and the makers recently also shot for the first song Allah Duhai Hai.

The producer had then shared a picture on his Twitter page while posing with Remo and hol,ding a clapperboard and Tweeted, “Shooting our first song on #race3 with my Director and the best Choreographer in the country @remodsouza @BeingSalmanKhan @Asli_Jacqueline @thedeol @ShahDaisy25 @Saqibsaleem @tipsofficial @SKFilmsOfficial”. Director Remo in an earlier interview talked about working with Salman and said, “If a superstar or a big star is coming into a franchise, it always takes the franchise up. Of course, Salman Khan joining Race 3, it is definitely heading up.”

Meanwhile, reports say that Salman Khan shot for a song for the film despite receiving death threats from the goon Lawrence Bishnoi with regard to the black buck poaching case. The shoot of the film was stalled as the police were concerned about the security of the star. Race 3 will be the third installment in the Race franchise and Salman Khan’s presence in the cast has increased the curiosity of the audience. There were reports that Shah Rukh Khan was offered a negative role in Race 3 but was turned down. The film is expected to be released in theatres on June 14, 2018.