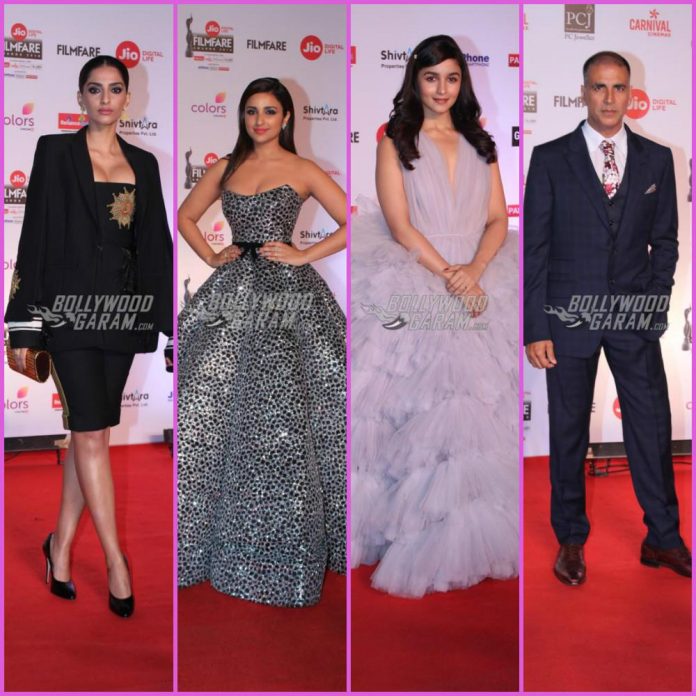 The red carpet of the Jio Filmfare Awards 2018 was no less than a fashion ramp as stars from Bollywood showed off their glamorous side at the venue in Mumbai on January 20, 2018. From Arjun Kapoor and Neha Dhupia to Akshay Kumar and Sonam Kapoor, Kajol and Rekha, everyone arrived in the most glamorous outfits.

Rajkummar Rao, who walked away with two Filmfares for Trapped and Bareilly Ki Barfi, looked dapper in a grey suit and was accompanied by beau Patralekha, who looked gorgeous in an off shoulder black outfit. Kajol too made heads turn in a beautiful velvet maroon gown with a trail. Ranveer Singh maintained his signature quirky style with a suit which had posters of his favourite films from the 70s and 80s.

Alia Bhatt sported a gown with dramatic frills while Parineeti was seen in an off-shoulder gown by kujtameri. Shahid carried off well an all-white suit while Sonam looked ultra stylish in a formal blazer with knee-length pants and high heels. Talking about the winners, film, Hindi Medium bagged the Best Film Award while the Best actor Male was claimed by Irrfan Khan for his performance in Hindi Medium. Vidya Balan won the Best Actor Female award for her performance in Tumhari Sulu.

Here is the complete winner’s list for the Jio Filmfare Awards 2018:

Best Cinematography: Sirsha Ray for A Death In The Gunj
Lifetime Achievement A ward: Mala Sinha and Bappi Lahiri