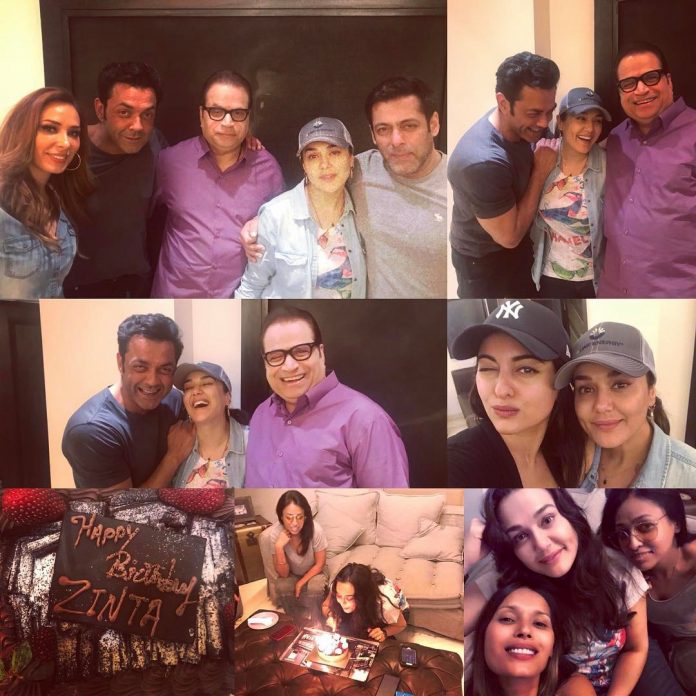 Bollywood actress Preity Zinta is celebrating her 43rd birthday on January 31, 2018. The Soldier actress was seen celebrating with some of her close friends and co-stars from the industry including Bobby Deol, Salman Khan, Iulia Vantur and others.

Preity took her social media account and shared a few pictures of her birthday party with close friends and colleagues. The actress posted a picture and wrote, “Thank you all for all the wonderful birthday wishes So humbled and so touched by all the good wishes Loads of love ! #AboutLastNight”

Preity Zinta in the pictures can be seen bonding with Salman, Ramesh Taurani, Bobby Deol, Sonakshi Sinha and Iulia Vantur. The actress looked pretty in a casual t-shirt, denims, a denims jacket and a cap. Preity’s husband Gene Goodenough was not seen at the party but he surely might have some special plans for his lady love.

The Veer Zaara actress in an earlier interview talked about her husband Gene and said, “For me, it is very simple, I am married, working and very happy. I am lucky that I am married to a person who actually pushed me into doing a movie. I thought I didn’t want to do any more movies and I moved to the business side of life.” The actress was last seen in a cameo appearance in the film Happy Ending in 2014.