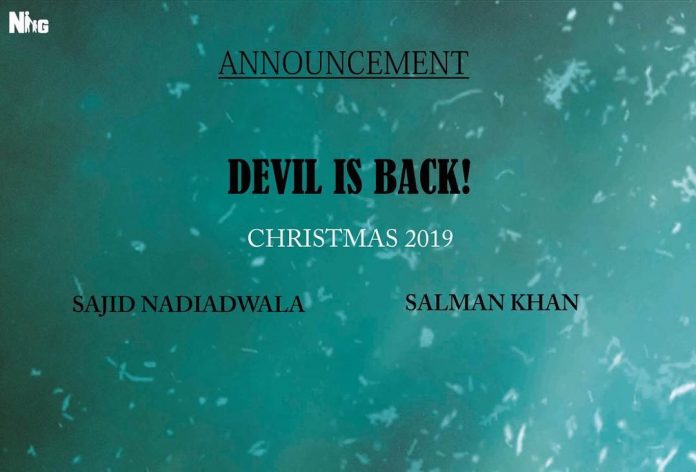 Salman Khan starrer Tiger Zinda Hai made a successful run at the box office. The Dabangg star has always made sure to treat his audience with quality entertainers. While the actor is busy shooting for the film Race 3, makers of Kick have announced a sequel.

The official Instagram handle of Nadiadwala Grandson posted a picture with the words, Announcement, Devil Is Back, Christmas 2019, Sajid Nadiadwala and Salman Khan. The picture was captioned, “The wait is over! #DEVILisBACK!! #SajidNadiadwala’s Kick 2 starring @BeingSalmanKhan releases Christmas 2019. @WardaNadiadwala.”

The film has been scheduled to be released during Christmas 2019. Salman Khan’s presence in the film is confirmed but the other details of the film have been kept under wraps. Kick starred Salman along with Nawazuddin Siddiqui, Randeep Hooda, Jacqueline Fernandez and others and was released during Eid in 2014. The film was directed by Sajid Nadiadwala and was the official remake of the Telugu flick with the same name.

Salman’s another film Bharat directed by Ali Abbas Zafar is expected to hit the theatres during Eid 2019. This means Salman has two major releases in 2019 so far. The actor was last seen in Tiger Zinda Hai and his earlier film Tubelight could not perform as expected at the box office.