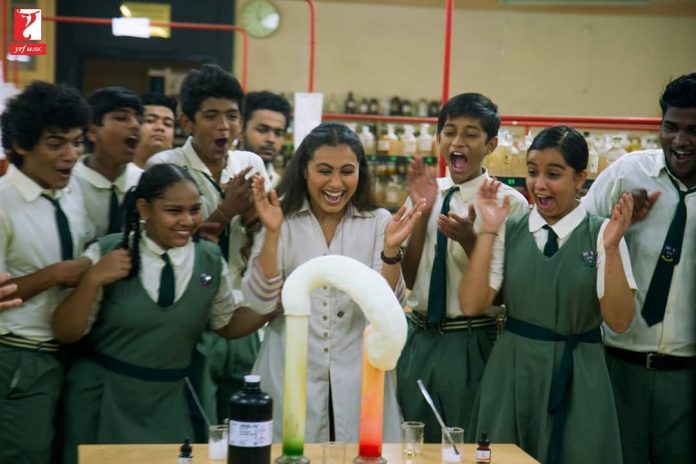 Makers of the upcoming film Hichki are ready to unveil the first song from the film on February 20, 2018. Before the song is released, a teaser of the title track Oye Hichki has been unveiled.

The teaser has shown Rani Mukerji, dancing with her school children and enjoying life to the fullest. The teaser was shared on the official Instagram page of Yash Raj Films with the caption “Ye Hichki Pani se nahi samajh se jaegi (this hiccup will not subside by water but by knowledge) #OyeHichki Song coming on 20th Feb. #RaniMukerji | @hichkithefilm @siddharthpmalhotra #Hichki #23rdMarch2018 #OyeHichki #songteaser #OyeHichkiteaser #20thfeb #yrf #yrfmusic”

Rani Mukerji will be seen playing the role of a teacher Naina Mathur, who suffers from Tourette symdrome and has a challenge to discipline children of the slum areas and educate them. The film will mark the return of Rani to films after the birth of her daughter Aadira.

Hichki is directed by Sidharth P Malhotra and produced by Maneesh Sharma and Aditya Chopra. The film was earlier expected to be released on February 23, 2018 but was then postponed to March 23, 2018 due to board exams. Hichki has inspirations from the 2008 film Front Of The Class that is based on the book with the same name.