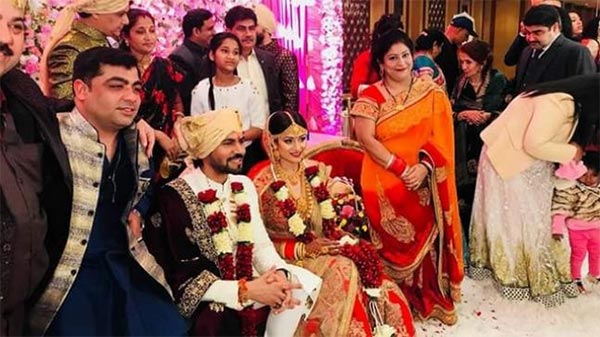 TV actor Gaurav Chopra surprised his fans after he got married in a private wedding ceremony in Delhi on February 19, 2018. Gaurav secretly got married to Hitisha Cheranda amidst just close friends and family members.

While the wedding ceremony was kept away from the eyes of the cameras, some of the inside pictures made their way on the social media. Not many TV celebrities were seen at the wedding except Karan Mehra and his wife Nisha Rawal. Some of the pictures surfaced online showed a dapper Gaurav Gupta dressed in a royal attire with a white sherwani with a maroon shawl while the bride looked gorgeous in a red lehenga.

Gaurav Chopra on the personal front had two public affairs with Narayani Shastri and Mouni Roy. However, both the relationships could not work on the long run. The actor was also a contestant on the tenth season of the popular reality show Bigg Boss.

It seems like celebrities from the telly-ville have been taking the plunge in to marriage more in recent times. Celebrities like Bharti Singh, Aashka Goradia, Gautam Rode and others surprised their fans with their decision to enter in to the institution of marriage. Gaurav’s sudden reports of wedding has also come as a surprise for his fans.