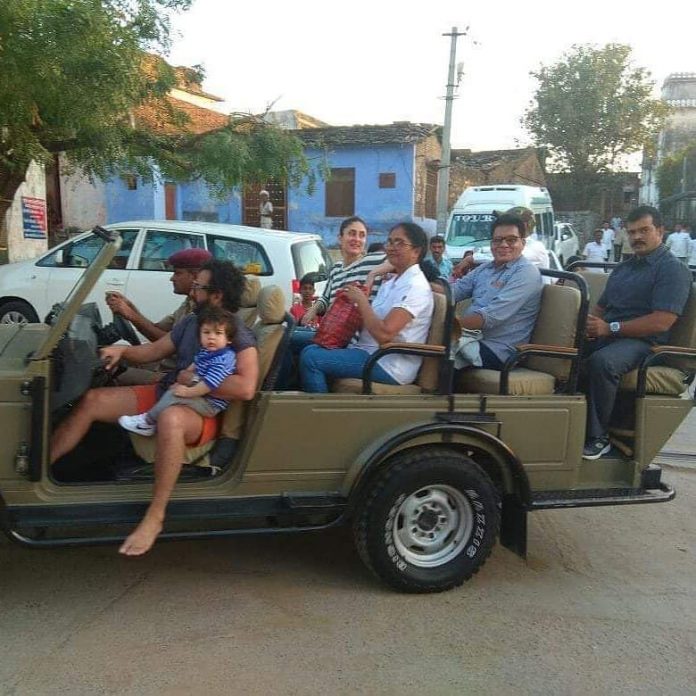 Bollywood diva Kareena Kapoor along with son Taimur Ali Khan has joined husband Saif Ali Khan in Rajasthan where he is shooting for the upcoming film by Navdeep Singh. A video recently went viral which saw Saif playing cricket with kids while Kareena and Taimur enjoyed watching them. A recent picture has gone viral which has shown the family taking a jeep ride.

The picture has shown Taimur sitting on father Saif’s lap while Kareena is seen sitting behind with the baby’s nanny. Saif has been shooting in a village called Desuri in Rajasthan which is two hours away from Udaipur for the upcoming film by Navdeep Singh. The film is yet to get a title.

The Navdeep Singh helmed film also stars Sonakshi Sinha and R Madhavan in important roles. As Saif stays at Udaipur, Kareena decided to visit Saif and the family will now be travelling to different places as they love to travel.

Kareena and Saif became parents to son Taimur Ali Khan on December 20, 2016. Taimur is one of the most popular star kids in the industry and is often snapped with his nanny and mother on casual outings or at the school. Kareena is also preparing for her upcoming film Veere Di Wedding.