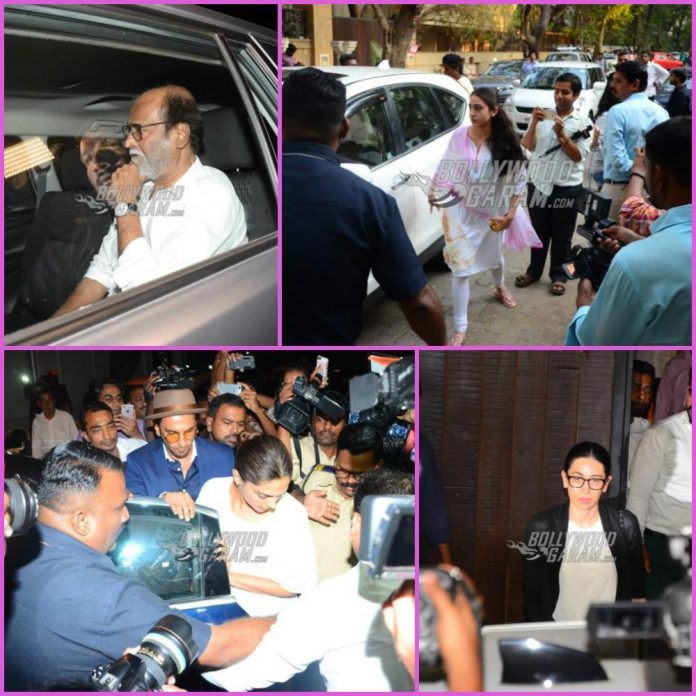 Some of the old co-stars and celebrities from Bollywood continued to visit Anil Kapoor’s residence to pay their condolences to late actress Sridevi who breathed her last on February 24, 2018. While Sridevi’s mortal remains are yet to get a clearance from the Dubai police, celebrities and well-wishers continued to pour in at Anil Kapoor’s residence on February 26, 2018.

Superstar Rajinikanth, who has worked in various films with Sridevi, was seen with his wife Latha at the Kapoor residence. Arjun Kapoor with sister Anshula, Deepika Padukone, Ranveer Singh, Mohit Marwah with his wife, Sara Ali Khan, Kamal Haasan, Karisma Kapoor, Divya Dutta, Shekhar Kapur and others were snapped paying their condolences to the family members at the Kapoor residence.

Some of the initial reports suggested that Sridevi had died of a cardiac arrest but the forensic reports mentioned that the death was caused due to accidental drowning in the hotel bathtub. The veteran actress was in Dubai with husband Boney Kapoor and Khushi Kapoor for nephew Mohit Marwah’s wedding.

Boney Kapoor had flew down to Mumbai with Khushi Kapoor while Sridevi had stayed back to spend time with her sister, but Boney then returned to Dubai to surprise his wife. The actress was asleep when he returned to the hotel. Sridevi and Boney had a chat for 15 minutes at the hotel room and then they decided to go for a dinner together. The Chaalbaaz actress then went to the bathroom and when she did not come out for 15 minutes, Boney forced open the door and found her unconscious in the bathtub.