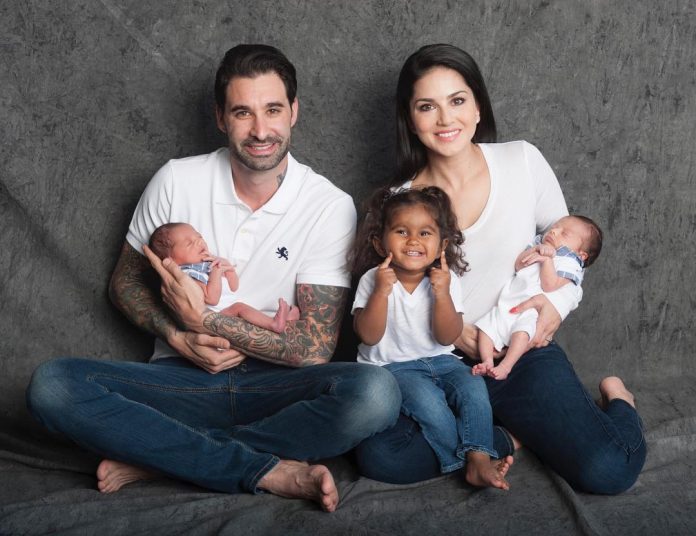 Sunny Leone and husband Daniel Weber are parents to daughter Nisha Kaur, who was adopted from a remote village in Maharashtra. Now the actress made another big announcement saying that they are now parents to three children: Nisha Kaur, Asher Singh Weber and Noah Singh Weber.

Sunny took her Instagram account and announced that they are now parents to two twin boys as well. The Jism 2 actress shared an adorable picture of the family and wrote, “God’s Plan!! June 21st, 2017 was the day @dirrty99 and I found out that we might possible be having 3children within a short amount of time. We planned and tried to have a family and after so many years our family is now complete with Asher Singh Weber, Noah Singh Weber andNisha Kaur Weber. Our boys were born a few weeks ago but were alive in our hearts and eyes for many years. God planned something so special for us and gave us a large family.We are both the proud parents of three beautiful children. Surprise everyone!”

The picture has shown the family in coordinated outfits, while little Nisha looks adorably excited about her new siblings. Sunny in an earlier media interaction talked about her daughter Nisha and said that she is enjoying every moment with her and that there is nothing more she can ask for.

The actress had earlier shared that she and husband Daniel do not have time to take a break for maternity commitments as they have busy schedules professionally. This was when they decided to go the adoption way and went ahead and adopted Nisha from Latur in Maharashtra, India. Nisha was 21 months old at the time of adoption. On the work front Sunny Leone was last seen in the film Tera Intezaar which also starred Arbaaz Khan. The film did an average business at the box office.