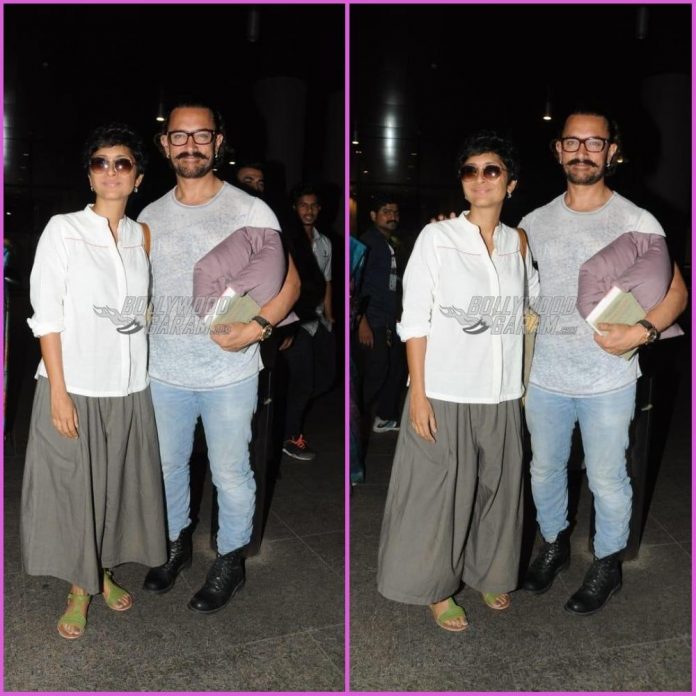 Bollywood couple Aamir Khan and Kiran Rao was snapped at the Mumbai airport on May 3, 2018. Aamir and Kiran were snapped returning from Aurangabad and were all smiles for the cameras at the airport.

The couple was in Aurangabad for addressing a social issue. Aamir looked dapper in a grey t-shirt and a pair of denims while Kiran was seen in a white shirt and a grey wide legged pants. The couple was all smiles for the paparazzi and even took a moment to pose together.

Aamir has been active in social work apart from acting in films. The actor is currently looking forward for the release of his upcoming film Thugs of Hindostan. The film also stars Fatima Sana Sheikh, Amitabh Bachchan and Katrina Kaif. Aamir while talking about working with Amitabh Bachchan for the first time expressed, “Working with Mr Bachchan was my dream and I’m really happy that I’m living it right now. I’m like a child in a toy shop and he is a complete joy to work with. His ability as an actor, his concentration, the effort that he puts in, his focus towards his work and above all, the kind of person he is, all this makes it a very enriching and memorable experience for me. So, it’s a dream come true.”

Thugs of Hindostan is due to be released in theatres on November 7, 2018.