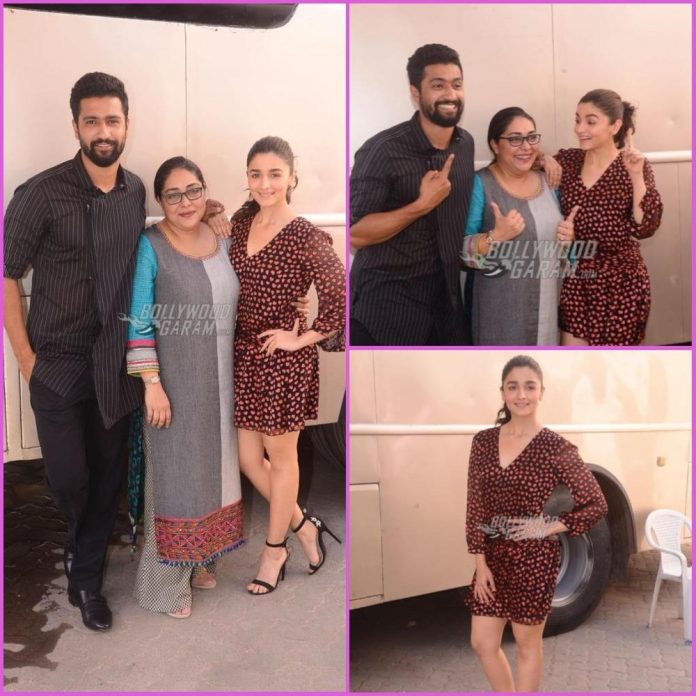 Alia Bhatt, Vicky Kaushal and Meghna Gulzar came together to promote their upcoming film Raazi in Mumbai on May 2, 2018. As the film is ready to be released in the upcoming week, the actors and director Meghna have geared up for the promotions of the film despite the scorching heat.

Alia looked pretty in a black outside with golden hearts while Vicky looked dapper in a black striped shirt and black pants. Director appeared in a simple kurta and pyjama and joined her actors for the promotions.

The upcoming film is a spy thriller and is based on the novel, Calling Sehmat. Alia will be seen playing the role of a spy. The Badrinath Ki Dulhania actress during a recent interview confessed, ”It was exhausting. But that’s also why I chose it. There were days when I’d be thinking, ‘Oh my god! Aj yeh scenes hai’!(today I have to do these scenes). I had to build up strength and emotion. That feeling is scary. But it’s also addictive. When you move past that feeling, you give your best. Whether it was during Udta Punjab, Dear Zindagi or Raazi. Coming back to the earlier question, I don’t know if I identified with the girl. She’s an extremely brave girl. I’m not saying I’m not brave. But I’m not that brave. I can’t just drop everything.”

The film also stars Rajit Kapur and Shishir Sharma and will be released in theatres on May 11, 2018.