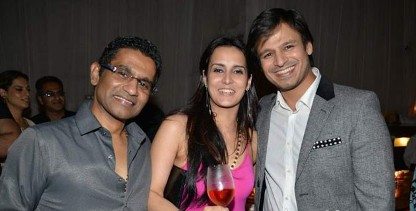 Bollywood actress Tulip Joshi – who made her debut with the movie ‘Mere Yaar Ki Shaadi Hai’ – celebrated her 34th birthday with her husband and close friends at Escobar in Mumbai. Several celebrities were spotted at the party, including Vivek Oberoi, Zayed Khan, Vikas Bhalla, Krishika Lulla, Sudhanshu Pandey along with wife Mona and Shama Sikander.

After her first movie, Joshi appeared in ‘Matrubhumi’, which is a dark film about a futuristic world with almost no women. Another movie, ‘Dhoka’ also helped the actress to gain some recognition.

Tulip has also appeared in many South Indian movies so far.