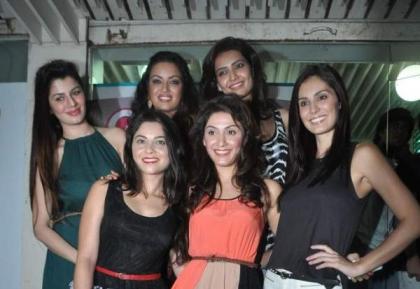 The female cast of the much-awaited adult comedy ‘Grand Masti’ was recently spotted chilling out at Yogurtbay in Bandra area in Mumbai. The actresses in the upcoming movie include Sonalee Kulkarni, Karishma Tanna, Bruna Abdullah, Kainaat Arora, Maryam Zakaria and Manjari Fadnis.

The male stars of the movie include Ritesh Deshmukh, Aftab Shivdasani and Vivek Oberoi.

The movie has been released on September 13, 2013. ‘Grand Masti’ is the sequel to the 2004 movie ‘Masti’ and so far, the new movie has opened fairly well at the box office. The story of the movie is about married guys who are bored in their regular married lives and are looking for some fun somewhere else.