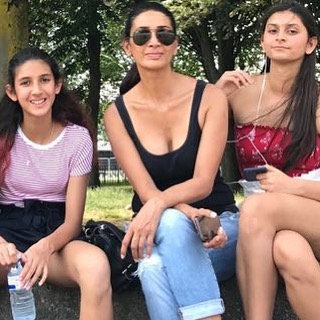 Bollywood’s former couple Arjun Rampal and Mehr Jesia, got officially separated recently. However, a few recent developments have indicated that despite their differences, the couple remains in a cordial relationship. Arjun and Mehr along with their daughters Mahikaa and Myra have flown to a Parsian holiday.

The Daddy actor shared a few pictures from their holiday which featured Mehr and daughters Mahikaa and Myra. One of the pictures had the caption, “Parisian ladies.” The holiday album consists of some beautiful pictures of his daughters but Arjun himself cannot be seen in any of them. Another picture of Mahikaa and Myra has the caption, “My babies in Paris at the Sacre-Coeur. So beautiful they are, na?”

Arjun and Mehr announced their separation in March 2018. Both are former models and were married for 20 years. The former couple had released an official statement saying, “After a 20-year-long beautiful journey filled with love and beautiful memories, we would like to share, that all journeys have different paths. We feel that it is time for us to move on to different destinations henceforth. We have always been solid when it has come to us, we will continue to be solid for each other and our loved ones, as we embark upon a new journey”.

Arjun Rampal was last seen in the film Daddy and is currently looking forward to his film Nastik.