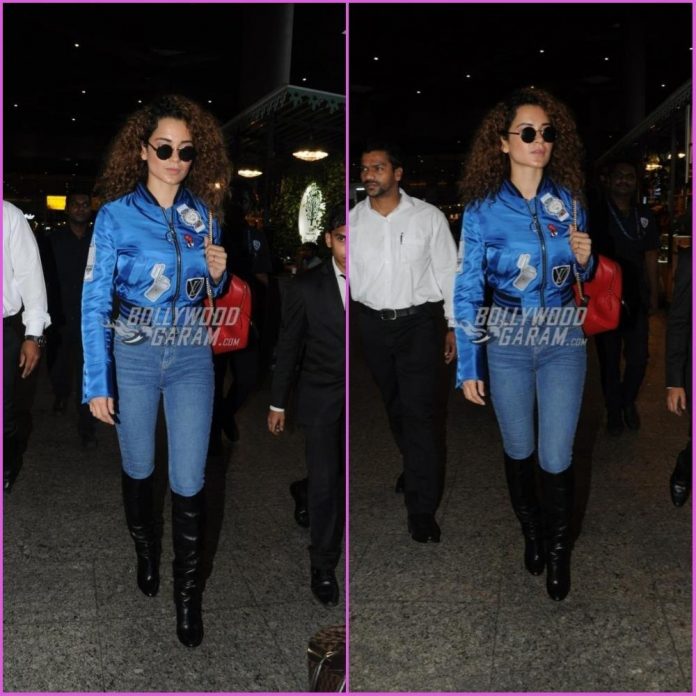 Kangana Ranaut was in London to shoot for her upcoming film Mental Hai Kya. The Queen actress was snapped at the Mumbai airport on July 12, 2018.Kangana returned from London and looked uber cool in a high waist denims, black boots and a cropped blue jacket with vintage glares.

The Tanu Weds Manu actress wrapped the shoot of Mental Hai Kya’s London schedule a few days back and was later seen vacationing in the city with a few of her close friends. Kangana is also looking forward towards her next release Manikarnika – The Queen Of Jhansi. The actress will be seen playing the lead, Rani Laxmibai.

The film also stars Ankita Lokhande, Atul Kulkarni, Sonu Sood and Jissu Sengupta playing important roles. Talking about the film Mental Hai Kya, it also stars Rajkummar Rao and this will be their second film together after Queen. The film is helmed by Prakash Kovelamudi and co-produced by Shibha Kapoor, Ekta Kapoor and Shailesh R Singh.

Ranaut is also roped in for Anurag Basu’s upcoming directorial along with another sports drama flick Kabaddi by Ashwini Iyer Tiwari.