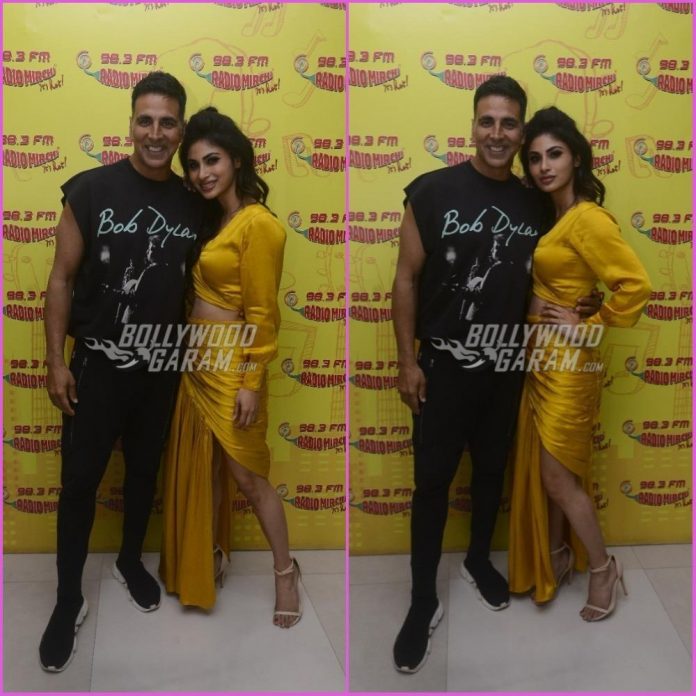 Akshay Kumar and Mouni Roy are promoting their upcoming film Gold together. The actors landed at Radio Mirchi station in Mumbai on August 3, 2018. Akshay and Mouni made a trendy appearance at the promotional event and were all smiles for the cameras.

The Padman star kept his look trendy in a black t-shirt and a pair of denims while Mouni was seen in a golden crop top and a matching asymmetrical wrap skirt. TV actress Mouni Roy is ready to make her Bollywood debut with Gold, which is a film about India’s first Gold medal at the Olympics post independence. Akshay in the film plays the role of Hockey coach Tapan Das while Mouni will be seen playing his wife Monobina Das.

Gold also stars Vineet Kumar Singh, Kunal Kapoor, Amit Sadh, Sunny Kaushal in pivotal roles. The film is helmed by Reema Kagti and produced by Farhan Akhtar and Ritesh Sidhwani’s Excel Entertainment. After Gold, Akshay will be seen in the periodic flick Kesari which also stars Parineeti Chopra. This will be the first time Akshay and Parineeti will be seen sharing the screen space together.