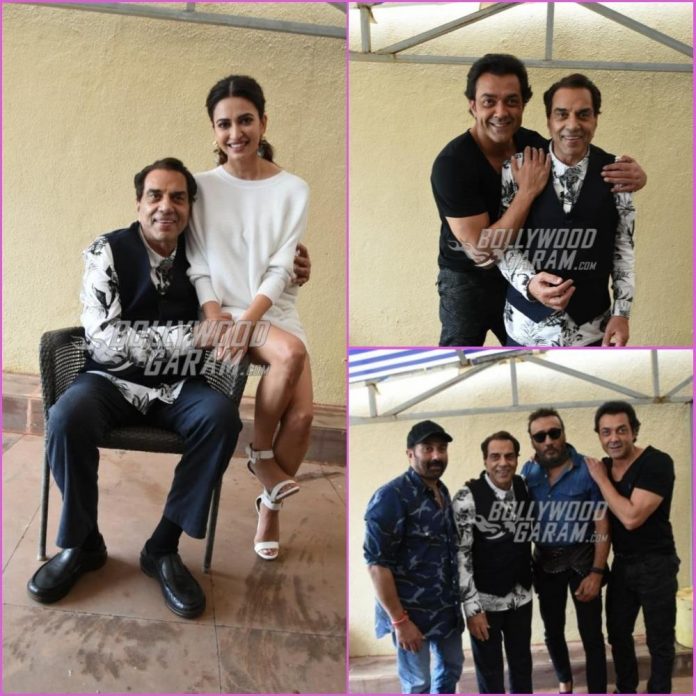 As the release date fast approaches, Makers of Yamla Pagla Deewana Phir Se are promoting the film on various platforms. Sunny Deol, Bobby Deol, Dharmendra and Kriti Kharbanda have been promoting the flick together. The actors once again gathered for a promotional event in Mumbai on August 28, 2018.

This time the promotional event was joined by Jackie Shroff who was seen interacting with the veteran actor Dharmendra. Sunny Deol looked dapper in a camouflage shirt and a pair of denims and a black cap while Bobby was seen in a black t-shirt and black cargo pants. Veteran star Dharmendra caught everyone’s attention with his charm and was seen in a printed shirt, black pants and a black jacket.

Actress Kriti looked pretty in an all-white outfit and completed her look with minimal make-up and a stylish pair of danglers. The upcoming flick is directed by Navaniat Singh and produced by Kamayani Punia Sharma and Aarushi Malhotra.

The film will also have cameo appearances by Salman Khan, Rekha, Sonakshi Sinha and Gippy Grewal and will be released in theatres on August 31, 2018.