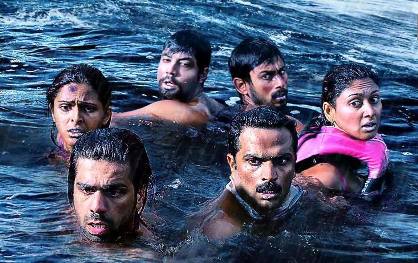 Gurmeet Singh made a movie which does not have much of a story, however, some might suspect that the plot of ‘Warning 3D’ has been taken from the Hollywood movie ‘Open Sea 2’. The movie “Warning 3D”  is a thriller by genre, but fails to create much excitement among the audience.

The story follows a group of friends who decide to throw a party on a yacht and they head out to the middle of the sea, away from any mobile network or civilization. At some point, they all decide to take a swim and jump in the water, one by one, forgetting to lower the ladder, which is their only way back on the yacht.

Due to one huge mistake, everyone gets trapped in the water and this is when the story begins to unravel and the audience starts to wait for the end as the movie becomes a bit uninteresting at some point. The entire plot has no exciting parts and just leaves the audience with the song ‘Bebasi’, with long shots of the yacht and the people floating around it.

There are many newcomers in the movie, but given the unpromising story line, its difficult to gauge their skills.Besides the fact that it is a 3D movie, there is nothing more to make you go see this movie.