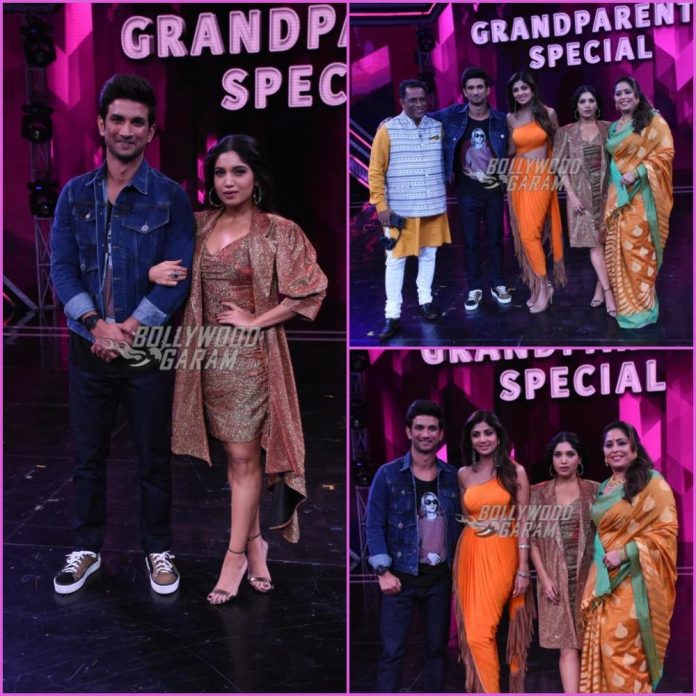 Bollywood’s young actors Sushant Singh Rajput and Bhumi Pednekar promoted their upcoming movie Sonchiriya on the sets of the reality show Super Dancer on February 25, 2019. The actors are on a promotional spree as the film is all set to be released in theatres on March 1, 2019.

The film has been shot in the valleys of Madhya Pradesh, India and is set in the year 1975. Sushant in the film will be seen playing the role of a dacoit. The contestants of the show had a fun time with the actors on stage. The actors also interacted with the judges Shilpa Shetty, Anurag Basu and Geeta Kapoor.

Sushant was seen shaking a leg with one of the contestants and looked dapper in a black t-shirt, black denims and a denim jacket. Co-star Bhumi dazzled in a golden outfit and looked great as she promoted her film. The one who grabbed all the attention was Shilpa Shetty who looked gorgeous in an orange outfit with brown details and a side cutout.

Sonchiriya also stars Manoj Bajpaye, Ranvir Shorey and Ashutosh Rana and will be released in theatres on March 1, 2019.