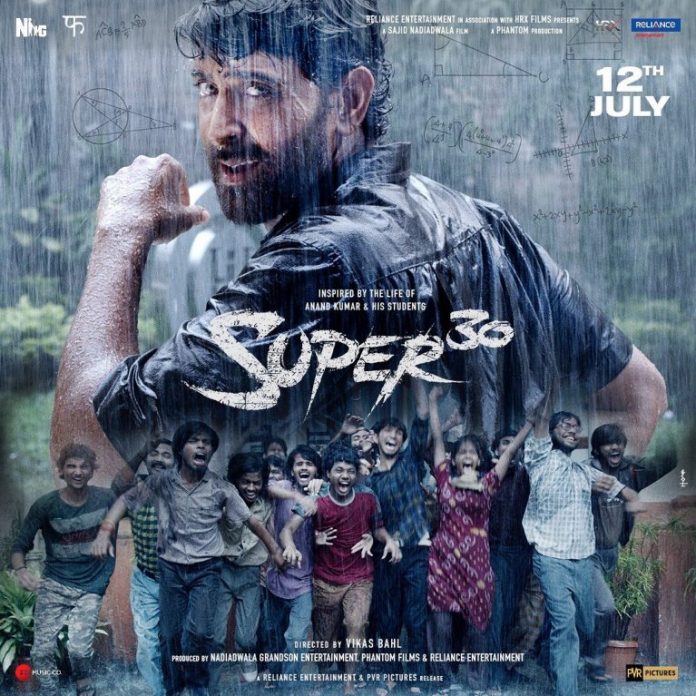 Bollywood star Hrithik Roshan unveiled the first poster of the upcoming film Super 30, which so far faced many road blocks. The official trailer of the film will be releasing in theatres on June , 2019. The film is directed by Vikas Bahl and is all set to be released in theatres on July 12, 2019.

Hrithik while sharing the poster wrote, “Haqdaar bano.” The poster has shown Hrithik smiling and looking back while he is drenched in the rain. A group of kids can be seen at the foreground while sheering happily. The story is based on the Bihar based mathematician Anand Kumar, who picks up 30 underprivileged kids and trained them for the IIT – which is India’s prestigious engineering colleges.

Anand was known for bearing the cost of training and even paid for the food and boarding for the kids during their coaching period. Filmmaker Vikas had stepped down as the director sexual harassment allegations against him but was brought back after he was given a clean chit on the accusations.

Super 30 will also see Mrunal Thakur, Virendra Saxena, Nandish Singh, Pankaj Tripathi, Johnny Lever, and Aditya Shrivastava. The music has been composed by the composer duo Ajay-Atul. Reports say that Anand Kumar will be accompanying Hrithik during the promotions of the flick.