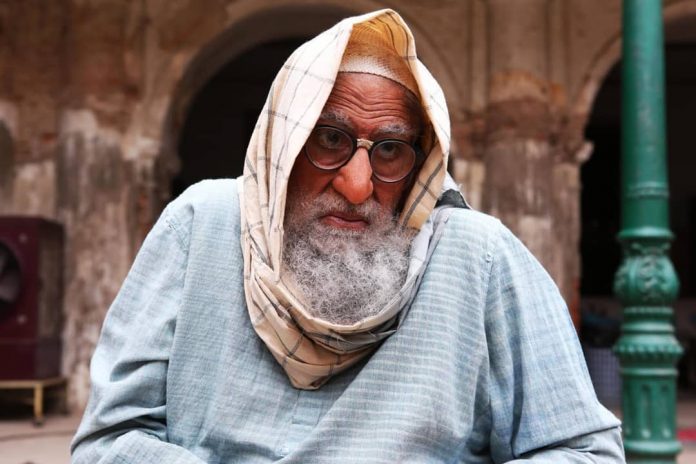 Amitabh Bachchan has never been apprehensive about taking up different roles in Bollywood. He has always challenged his own limits and has come out with flying colors. Mr. Bachchan first look from his upcoming film Gulabo Sitabo was revealed on June 21, 2019. The picture was Tweeted by trade analyst Taran Adarsh and going by the look it seems like Amitabh will be seen playing the role of an old bespectacled Muslim man with a fat nose.

The film also features Aayushmann Khurrana playing an important role and will be released in theatres on April 24, 2020. Adarsh Tweeted, “Unveiling Amitabh Bachchan’s quirky character look from #GulaboSitabo… Costars Ayushmann Khurrana… Directed by Shoojit Sircar… 24 April 2020 release.” The film is helmed by Shoojit Sircar and is written by his frequent collaborator Juhi Chaturvedi who has earlier worked on October, Piku and Vicky Donor.

Gulabo Sitabo is produced by Ronnie Lahiri and Sheel Kumar and this will be the first time Amitabh Bachchan and Aayushmann Khurrana will be seen sharing the screen space. Shoojit had talked about the family comedy in an earlier interview in Lucknow and said, “After Piku and Vicky Donor, I had been wanting to work with Mr Bachchan and Ayushmann on an equally quirky script so this fell perfectly in place.”

Amitabh Bachchan is also due to be seen in the upcoming films like Chehre, Brahmastra and Jhund.