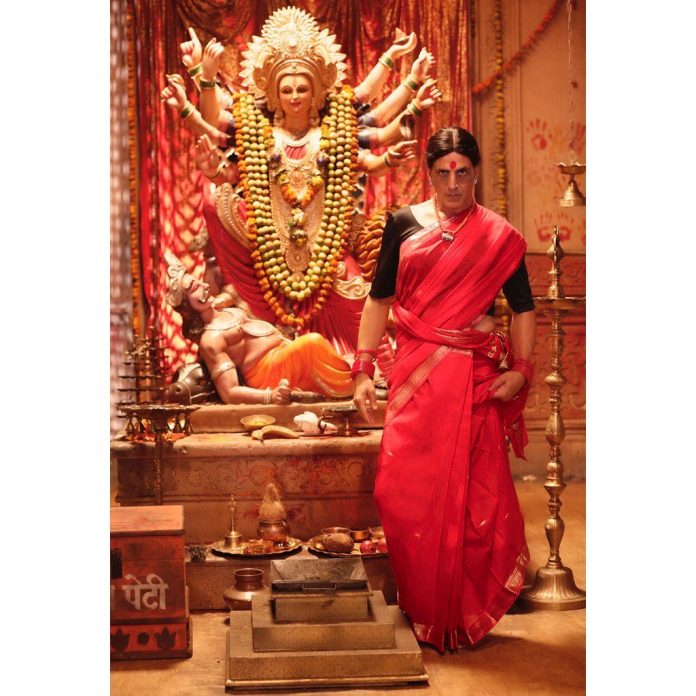 The makers of the upcoming film Laxmmi Bomb have unveiled the first look featuring Akshay Kumar clad in a sari. The upcoming horror comedy will see Akshay in a completely new avatar. This time the Khiladi star has crawled out of his comfort zone. The poster has shown Akshay dressed in a red sari standing next to a Durga goddess idol.

Akshay shared the poster on social media and wrote, “Navratri is about bowing to the inner goddess and celebrating your limitless strength.On this auspicious occasion,I am sharing with you my look as Laxmmi.A character I am both excited and nervous about… but then life begins at the end of our comfort zone…isn’t it? #LaxmmiBomb.” The upcoming film is a remake of the south film Kanchana. Laxmmi Bomb is directed by Raghava Lawrence and will see Kiara Advani in the lead role.

The Bhoolbhulaiya actor had earlier given a sneak peak in to his character where he was seen applying make-up on his face. Akshay had then written, “Bringing you one bomb of a story,#LaxmmiBomb starring @Advani_Kiara & yours truly!Bursting in cinemas on 5th June,2020. Fox Star Studios Presents. A Cape of Good Films Production in association with Shabinaa Entertainment & Tusshar Entertainment House. Directed by Raghava Lawrence”.