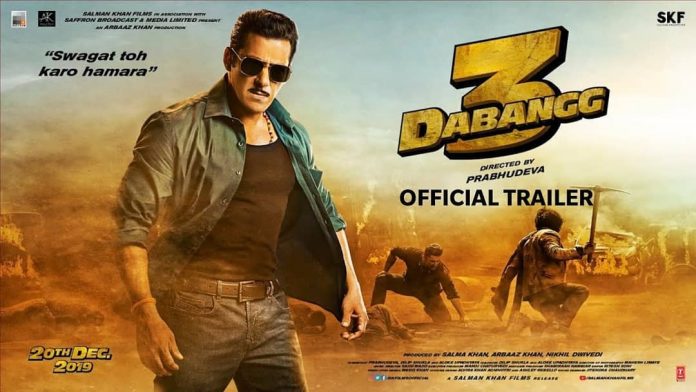 The much awaited official trailer of the upcoming film Dabangg 3 is out now and the fans cannot wait to catch the actual film. The trailer has shown the best side of Salman Khan , who will be seen romancing Sonakshi Sinha and Saiee Manjrekar. Dabangg 3 will mark the debut of Saiee Manjrekar in Bollywood.

The trailer opens with Inspector Chulbul Pandey played by Salman, while introducing himself and then introduces his beautiful wife Rajjo played by Sonakshi. A flashback can be seen where Chulbul explains why he became a tough cop. Salman shared the trailer on his Twitter account and requested his fans to take out three minutes of their time to watch the trailer.

While everything seems nice and fun, things change when the antagonist Kichha Sudeep enters and is the worst enemy of the love birds. It is not clear to what the actual reason is, but it seems like Khushi played by Saiee was murdered. After many years Kichha is now a more powerful goon and returns to the area where Chulbul Pandey is in charge.

It is obvious that the film is about the differences between Kichha and Chulbul Pandey, who will surely take a revenge. Dabangg 3 is all set to be released in theatres on December 20, 2019.