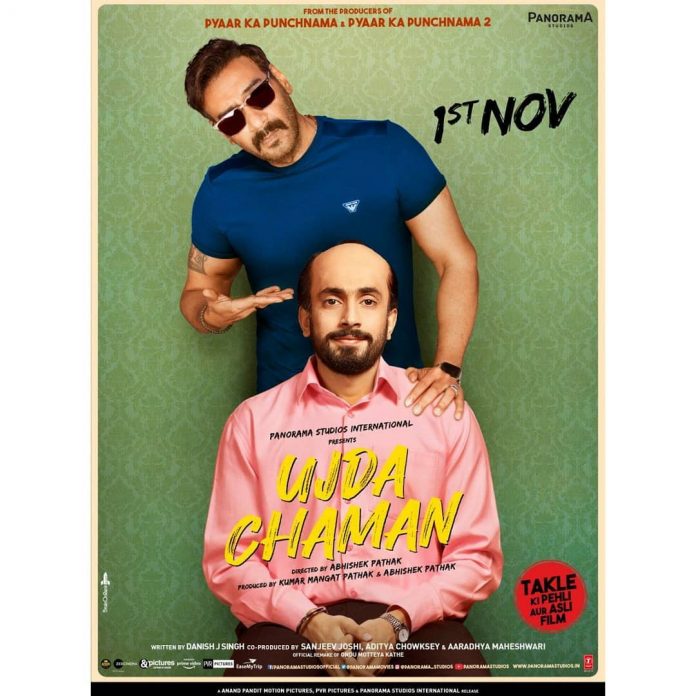 Upcoming comedy flick Ujda Chaman has been in news in recent times due to copyright issues and its similarities with the film Bala starring Aayushmann Khurrana. Both the films in question are based on the same topic of premature balding and were also releasing at the same time span. But then producers of Ujda Chaman, pre-poned the release of the film to November 1, 2019. Actor Ajay Devgn shared a poster of Ujda Chaman on social media. The new poster features Ajay himself as he points out at Sunny Singh’s head.

Ajay along with the new poster informed about the new release date of the film. After the new poster was unveiled, there are reports that Ajay might have a cameo in the film. There is a possibility and might also be a friendly gesture as Ajay is a close friend to makers Kumar Mangat and Abhishek Pathakk.

Ujda Chaman also stars Karishma Sharma, Maanvi Gagroo and Aishwarya Sakhuja. The upcoming comedy drama flick is directed by Abhishek Pathak and was earlier expected to be released in theaters on November 8, 2019. If the cameo reports are true, then this will be second time Sunny and Ajay will be seen sharing the screen space.

Ajay is currently preparing for the upcoming film Tanhaji: The Unsung Warrior which is expected to be released in January, 2020.