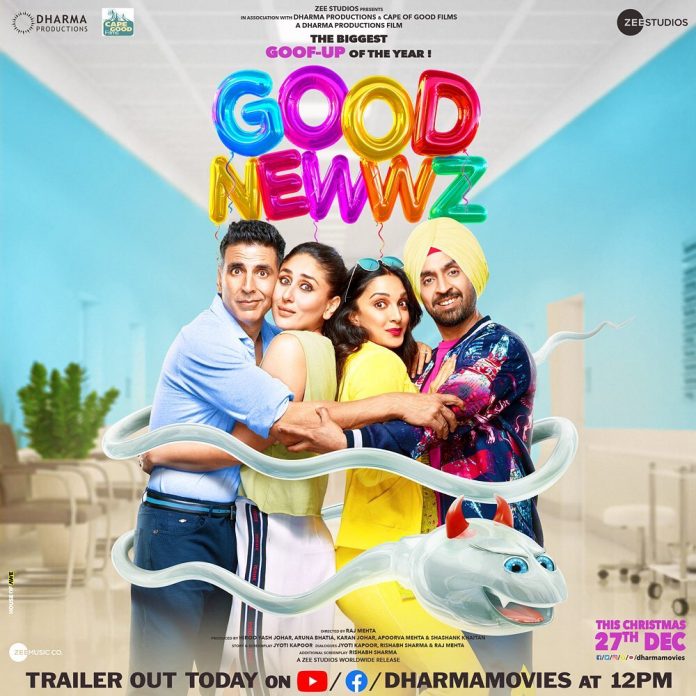 The much awaited official trailer of the upcoming flick Good Newwz is out. The Akshay Kumar, Kareena Kapoor, Diljit Dosanjh and Kiara Advani starrer flick is directed by Raj Mehta and is all set to be released in theatres on December 27, 2019.

Meet the Batras who are two married couples with the same surname and are looking forward to begin a family. The trailer begins with Akshay Kumar and Kareena Kapoor discussing with a fertility expert at a medical centre. The couple then decides to opt for an IVF (In-Vitro Fertilization). This is when Akshay and Kareena meet Diljit and Kiara, who are also at the same facility, undergoing the same procedure.

But a blunder occurs at the facility and a mix up causes headache for both the couples. The trailer has shown the couple undergo the pregnancy tenure in a hilarious manner and how the two families deal with each other.

Akshay Kumar is at his hilarious best while the audience cannot wait to see him entertain again in another laugh riot. The film was earlier expected to be released in September, but was postponed to November and was again pushed to December 27, 2019. Good Newwz is produced under the banner of Dharma Productions and also features Adil Hussain, Tisca Chopra and Gulshan Grover.