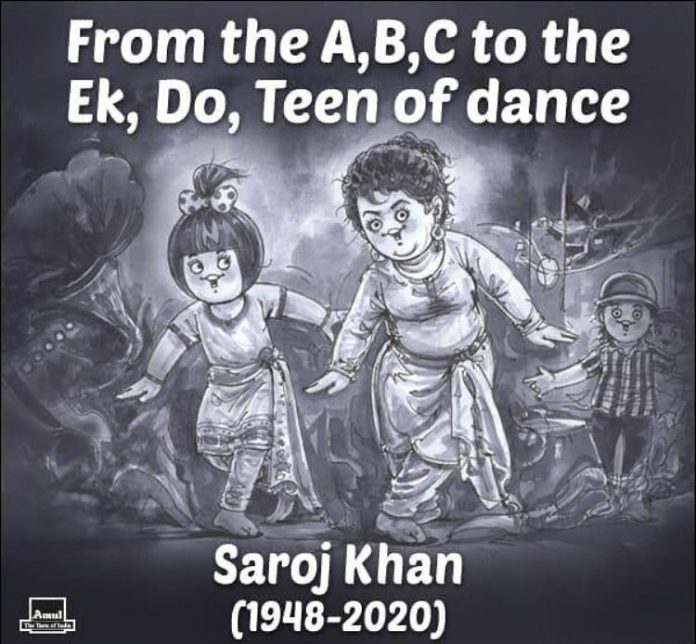 It was on July 3, 2020 when Bollywood lost another veteran, Saroj Khan. The choreographer passed away of cardiac arrest at the age of 71 and succumbed to diabetes related problems. Indian diary giant Amul paid tribute to the late choreographer through a heartfelt Instagram post while acknowledging her contribution towards the Indian cinema.

The poster had Saroj Khan in some of her signature dance moves that became popular. Amul captioned the poster, “From the A, B, C To the Ek, Do, Teen of dance“. Saroj Khan has choreographed some of the iconic songs in Bollywood like the Ek Do Teen track from Tezaab, featuring Madhuri Dixit, is still remembered for the dance steps.

Khan was one of the remarkable choreographers in the industry and was fondly called as ‘Masterji’. The choreographer has worked on more than 2,000 songs in a career spanning more than four decades.

Khan was popular during the Sridevi and Madhuri Dixit era when these two superstars reigned the industry. It was in 2008, when Saroj Khan received a National Award for the song Yeh Ishq Haaye from the film Jab We Met which featured Shahid Kapoor and Kareena Kapoor. Khan in a recent interview had revealed that she started dancing at the age of 3 and belonged from a middle class family who had migrated from Pakistan during the partition time.