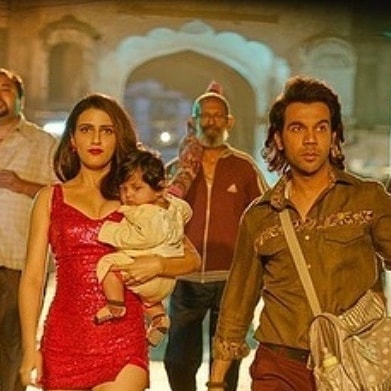 The first look of the upcoming film Ludo has been released and has shown the lead actors Fatima Sana Shaikh and Rajkummar Rao. The film will soon be released on the popular OTT Platform Netflix. Rajkummar in the new still can be seen having a distinct hair style while Fatima can be seen holding a baby in her arms while she is all dressed up.

The new poster has shown the two lead actors walking down the street while three other men can be seen following them . Rajkummar Rao shared the new still on his Instagram account and captioned mentioning about four players who take fate in to their hands in a high stakes game.

The film is directed by Anurag Basi, who has earlier directed the films like Barfi and Jagga Jasoos. Ludo also stars Abhishek Bachchan, Aditya Roy Kapur, Sanya Malhotra, Pankaj Tripathi and Asha Negi. The makers of the film have called it an anthology comedy flick.

Apart from Ludo, Rajkummar Rao is also looking forward to his films Roohi Afzana, The White Tiger and Chhalaang. Abhishek Bachchan was last seen in the web series Breathe Into The Shadows and is at present admitted at the Nanavati hospital as he recently tested positive for coronavirus and is undergoing treatment.