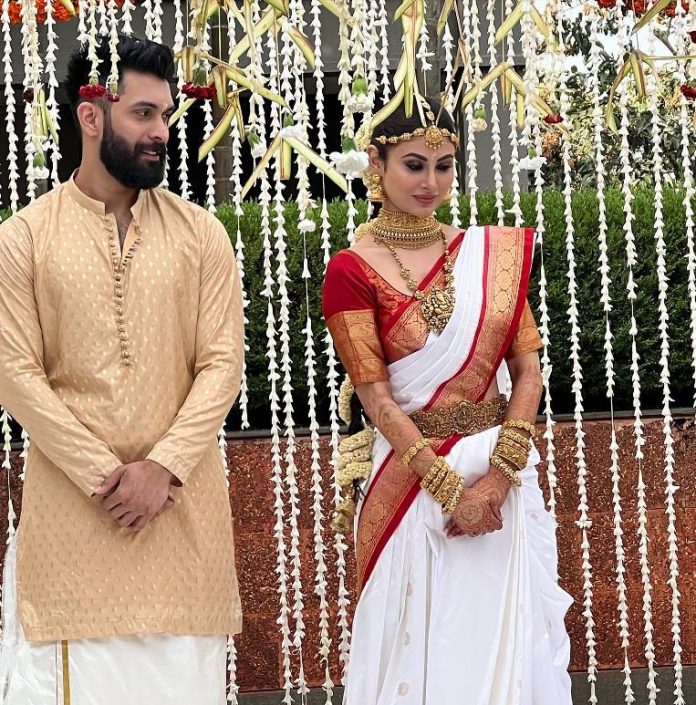 Indian actress Mouni Roy got married to Suraj Nambiar as per south Indian rituals in Goa on January 27, 2022. The couple has been dating for a couple of years before they took the decision to take the plunge. The wedding festivities started off on January 26, 2022 and the couple got married amidst close friends and family members. It was a traditional south Indian wedding and the couple is also expected to get married as per Bengali rituals.

Mouni as per the pictures released on the social media looked gorgeous in a traditional white and red sari with traditional jewellery. The groom Suraj was seen in a golden kurta with the traditional veshti. After the wedding festivities, the couple is expected to host a grand a wedding reception for friends.

For those who do not know who Suraj Nambiar is, he is an investment banker based in Dubai and has his roots from a Jain family. He has studied B.Tech in Civil engineering and has also studied Investment science along with International management from Stanford University.

Mouni Roy and Suraj met in Dubai and have been dating since then. Some of the friends of the couple who were seen attending the wedding included Mandira Bedi, Arjun Bijlani, Aashka Goradia and others.