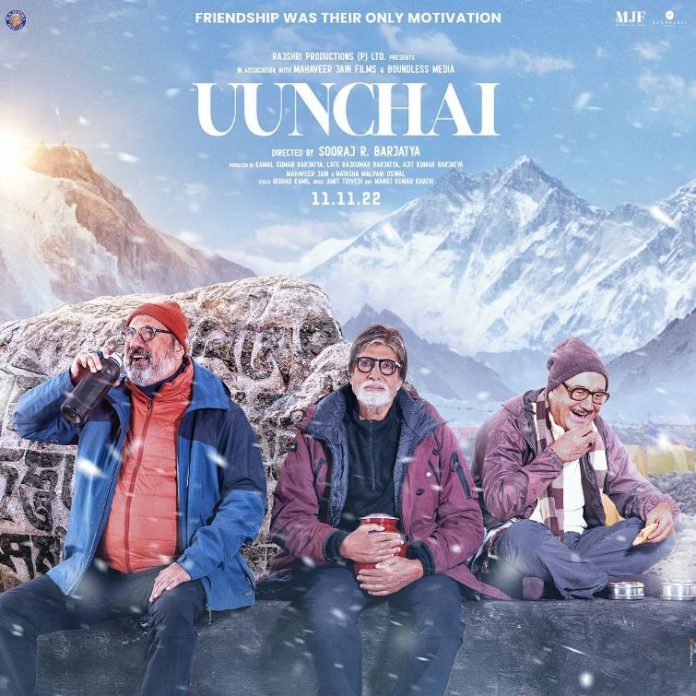 Some of the finest actors from Bollywood have been brought together in Uunchai, which is one of the most anticipated films. Amitabh Bachchan, Anupam Kher and Boman Irani have been cast together for the film and a new poster has shown a glimpse of the characters played by them. The makers of the film had last month on the occasion of Friendship Day revealed the first poster of the film which left the audience curious and excited.

Now the new poster of the film is out and Amitabh Bachchan shared it on his Instagram handle. Mr. Bachchan in the new poster is seen sitting in the middle while Boman Irani can be seen on his right and Anupam Kher on his left. The background of the poster has shown snow-clad mountains and it seems like the film could be about an expedition of the three friends to Mount Everest.

The poster has shown Anupam Kher enjoying a meal from his tiffin while Boman Irani is seen enjoying a drink while Amitabh Bachchan is just seen sitting with a jar the contents of which are unknown. The film also stars Parineeti Chopra, Neena Gupta and Sarika playing important roles.

Uunchai is helmed by Sooraj Barjatya under the popular film banner Rajshri Productions which has in the past produced some of the remarkable and noteworthy films like Hum Aapke Hain Kaun, Prem Ratan Dhan Payo and more.