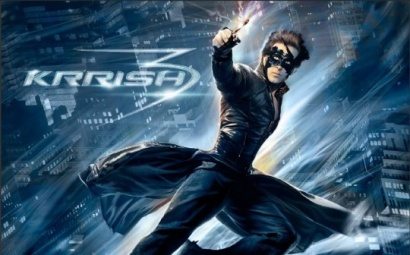 BollywoodGaram.com: As the makers previously expected, the superhero movie ‘Krrish 3’ is winning over the box office and has become a massive hit among the audience. The Hrithik Roshan and Priyanka Chopra-starrer movie has earned Rs. 72.7 crore within the first three days of its release and this is only the beginning.

The current number from the box office earnings also included the collections from the Telugu and Tamil versions of the movie. The Rakesh Roshan-directed Bollywood sci-fi flick was released on November 1, 2013 and collected Rs. 25.20 crore on its first day, then Rs. 23.20 crore on the second day and a whopping Rs. 24.30 collection on the festival day of Diwali.

The movie also features Vivek Oberoi and Kangana Ranaut in negative roles and is the third installment of the ‘Krrish’ series that started off in 2003 as ‘Koi… Mil Gaya’. Trade analysts have predicted that the movie will experiences a full house for the entire week. The makers of the movie did not leave any stone unturned when it comes to its promotion until the release.

During one of the promotional events, Hrithik said that this has become a good example to do movies which are at par with the Hollywood movies when it comes to visual and sound effects.