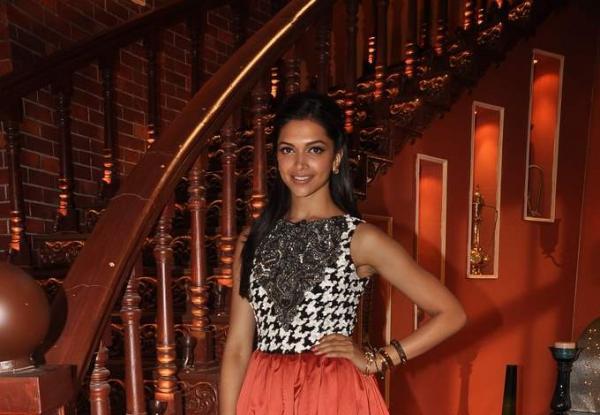 BollywoodGaram.com: Cast of the upcoming movie directed by Sanjay Leela Bhansali, ‘Ram-Leela’ will not be leaving any stone unturned when it comes to the flick’s promotion. The lead stars Deepika Padukone and Ranveer Singh were on November 5, 2013 spotted on the show ‘Comedy Nights With Kapil’ in Mumbai.

Reports say that Ranveer and Deepika had a blast while they were promoting their movie on the comedy show. The ‘Chennai Express’ actress agreed to dance to ‘Lungi Dance’ with a fan, while Ranveer was lucky to receive ‘Shagun ki Pappi’ from the character ‘Daadi’, played by Ali Asgar.

However, this is not the first time that Ranveer and Deepika appeared on the show. Ranveer promoted his movie ‘Lootera’ with actress Sonakshi Sinha, while Deepika promoted ‘Chennai Express’ with Shahrukh Khan earlier.