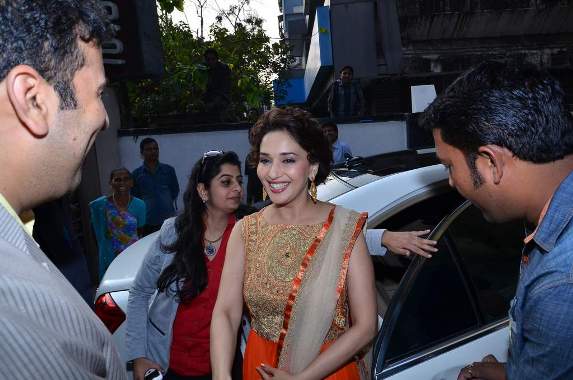 BollywoodGaram.com: Bollywood’s dancing beauty Madhuri Dixit on November 15, 2013 attended a grand event which was organized by P.N Gadgil Jewellers at their store in Vile Parle in Mumbai. The event was organized for the winners of Kshan Ala Bhagyachya 2013 and they were announced then.

Mrs. Nene – who is the brand ambassador of the store – rewarded the bumper prize winners of the contest. During the event, Madhuri said, “Its indeed an honour to be associated with a brand that has the core values of integrity and quality, a brand which has modernized over the period keeping their tradition in mind”.

The ‘Aaja Nachle’ actress also expressed her views about Sachin Tendulkar’s retirement and said that it is sad to see him retiring as he has inspired so many people.