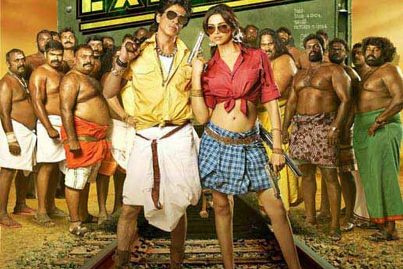 Makers of the Bollywood movie ‘Chennai Express’ have unveiled the much-awaited trailer for the flick. The Shahrukh Khan and Deepika Padukone starrer movie trailer launch was delayed due to the sudden death of actress Priyanka Chopra’s father. The trailer of the movie shows Shahrukh, who plays the role of a 40-year-old man and gets on the ‘Chennai Express’.

Shahrukh plays a character named Rahul, who gets on the train and has a hilarious encounter with Priya, character played by Deepika. Deepika plays the daughter of a South Indian don. The story is about their journey from Mumbai to Rameshwaram.

The Rohit Shetty directed movie promises plenty of laughs and action. The ‘Chennai Express’ will mark Rohit’s first movie with Shahrukh and could be the best film of 2013, unless Aamir Khuan’s ‘Dhoom 3’ does not come into the picture. The trailer for the movie shows countless one-liners by Shahrukh and is also the funniest edition of Bollywood’s superstar.

The movie has also brought Shahrukh Khan and Deepika Padukone together after six years since they worked on the movie ‘Om Shanti Om’, which was also Deepika’s debut. Meanwhile, Shetty has got a record of blockbuster movies with ‘Golmaal’ series, ‘Singam’ and ‘Bol Bachchan’. Checkout the trailer below.