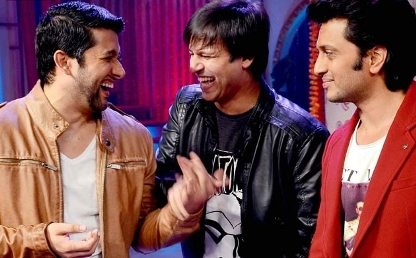 The filmmaker Indra Kumar is all set to release the upcoming movie ‘Grand Masti’, which features Vivek Oberoi, Riteish Deshmukh and Aftab Shivdasani. The cast and crew of the new movie recently celebrated Vivek’s birthday.

The fun celebration had Riteish and Aftab smearing birthday cake on Vivek’s face. The movie ‘Grand Masti’ is the sequel to the 2004 blockbuster ‘Masti’. This time, the makers of the movie have made an adult comedy flick, in order to make it more entertaining. With the new movie, Riteish, Vivek and Aftab are trying their best to get back to their respective careers. Vivek will also be seen in ‘Krrish 3′, in which he will be playing the role of a super villain. ‘Grand Masti’ is scheduled to be released on September 13, 2013.