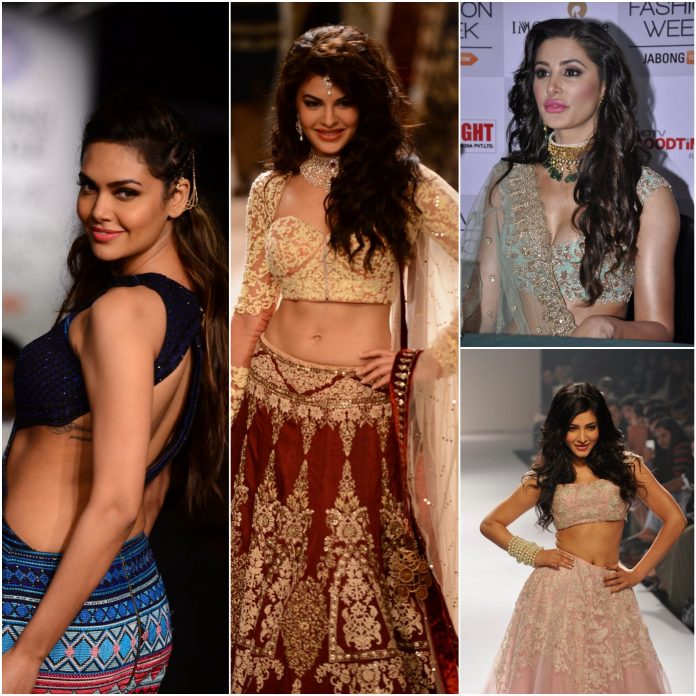 Tinsel town has just emerged from one of its busiest weeks – The Lakme Fashion Week Winter/Festive (LFW) 2014. The 6 day long gala event saw the glamorous worlds of Bollywood and fashion join hands to create an extravaganza worth reminiscing.

The LFW 2014 begun on August 19, 2014 and concluded on August 24, 2014. A bevy of celebs dotted the ramp and the red carpets, while fashion designers from across the country toiled to sprinkle the runway with the best of their couture creativity.

The Kapoor girl turned showstopper for coveted couturier Manish Malhotra at the grand finale of the LFW 2014. Shimmer, royal purple, and sequined silver, paired with Kareena’s sizzling style made for a complete stunner on the ramp.

Whoever said that black and grey is just boring? Look at this Priyanka Chopra picture! Piggy Chops pulled of a class act on the runway in a simple yet stylish Varun Bahl creation at the LFW 2014 grand finale show.

This Bollywood beauty’s career might not be going great guns, but in the style department, Esha Gupta rules the roost! Her multicolored uber, backless gown left onlookers astonished.

When Porcelain Swedish looks blend with Greek goddess-like features, you get – Elli Avram. This leggy lass might still be finding her feet in Bollywood, but on the ramp, she was as confident as any top rung heroine. Dressed in an exquisitely sequined scarlet red gown, the ‘Micky Virus’ star looked fitting for a ball.

Star kid Shruti Haasan hasn’t really tasted much success in showbizz, but this 28-year-old definitely knows how to dazzle on the ramp. Dressed in a pale pink lehenga and fitting bustier, the ‘Ramayya Vastavayya’ actress looked pure pretty.

This former model was obviously in her comfort zone as she sauntered down the ramp in a a desi avatar at the LFW 2014. The bridal attire was obviously quite antithetical to the spunky ‘Main Tera Hero’ actress, but we give her a thumbs up for carrying off the heavy ensemble with panache.

She is 40 something and a mother, need we say anything more! Malaika Arora Khan was dressed to kill an a red Sonaakshi Raaj sartorial masterpiece.

Donning a desi attire and hues of sunset orange and gold, the ‘Inkaar’ actress looked liked a million bucks on the runway. She brought to the ramp an old- world royal charm.

This Sri Lankan beauty turned into a demure bride at the LFW 2014. Dressed in shades of earthy red and nude, the ‘Kick’ actress looked gorgeous.

This former beauty queen’s hay days might be behind her, but when it comes to sashaying down the runway, it’s her eternal turf! Bringing back black in style, Sushmita appeared drop dead gorgeous.

Kajol, Richa Chadda, Celine Jaitley and Karisma Kapoor were also amongst the other filmy personalities that graced assorted LFW events.