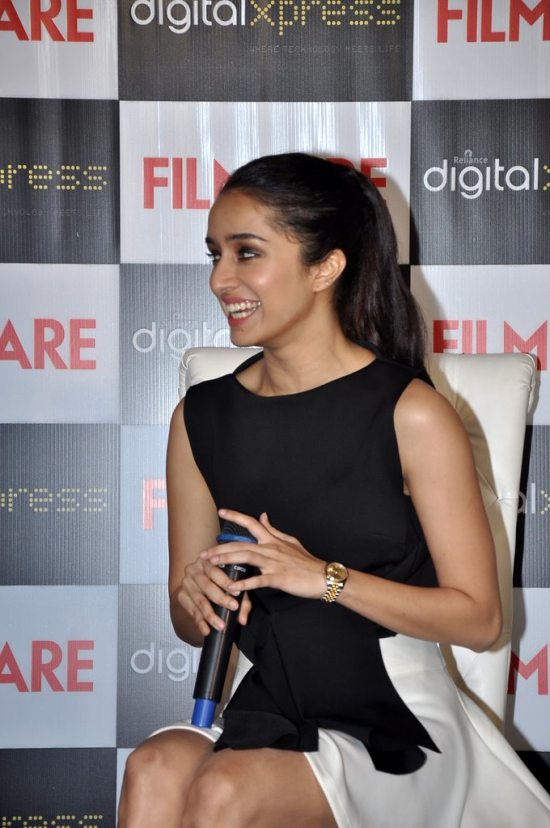 ‘Ek Villain’ actress Shraddha Kapoor unveiled the latest issue of one of India’s most prestigious Entertainment magazines – Filmfare. The young lass was featured on the cover page of the new issue, which had a sultry image of Shraddha in an uber hot backless gown with the caption – HELLO HOTTIE on it.

Shraddha looked her usual chic self in a black and white ensemble and was quite the crowd pleaser when it came to interacting with the press and media photographers. Well, once bitten twice shy.. we guess!

While interacting with the media at the event, Shraddha said, “A fashion magazine is more about fashion and it is fashion-centric. Every magazine likes to try something different with you keeping in mind what the trend is, what is in, and what is happening and all of that. I have a lot of fun on photo shoots and I had a great time in this one too.”

The young lady is currently a busy woman in tinsel town, her last film ‘Ek Villain’, opposite hottie Sidharth Malhotra was a great commercial success and her performance in the film was lauded by audiences and critics alike.

The star kid will now star in a serious Vishal Bharadwaj drama – Haider – opposite Shahid Kapoor. The film that is all set to release on October 2, 2014, is an adaptation of Shakespeare’s literary masterpiece ‘Hamlet’.