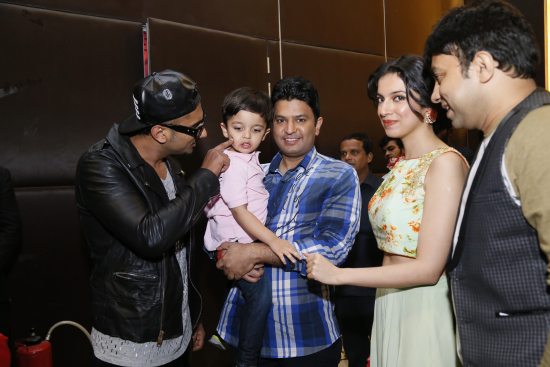 The ‘Blue Eyes’ singer will be seen in an all new avatar in  ‘Desi Kalakaar’.

Popular rapper-singer Yo Yo Honey Singh launched his new album ‘Desi Kalakaar’ along with T-Series head honcho Bhushan Kumar and supermodel/actress Urvashi Rautela in Mumbai on August 26, 2014. Bhushan Kumar’s wife and son were also present at the event.

The aata majhi satakli singer has collaborated with T-Series to produce this album that also features the Dabangg actress Sonakshi Sinha in the title track.

Talking about how this album is different from his previous ones, Honey Singh said, “This album has less party songs. There is no alcohol song in it. It is a very romantic and dance-based album. It is something new from Yo Yo Honey. A new avatar of him as ‘Desi Kalakaar’.”

Urvashi Rautela, who is made her Bollywood debut in the movie ‘Singh Saab’, will also be seen in one of the songs. The album will be available exclusively on digital music destination Hungama.