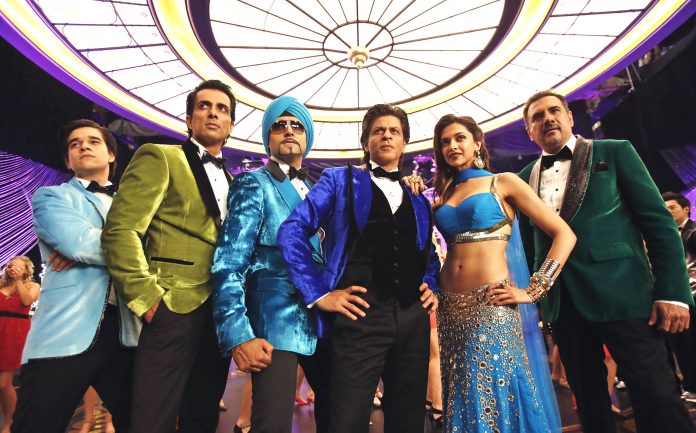 The film’s first look had a grand revealing on August 14, 2014, the media and fans at the event were given a sneak peak of the film. “Indiawalle” – a much hyped song from the movie – plays a major role in the film’s ethos, as it also lends to the films tagline – Todenge Taale Indiawalle.

Happy New Year’s trailer reveals the film’s magnum opus quality, shot in some of the most exotic locales of the world – Dubai’s Palm Jumeira and many more.

The trailer also achieved another feat within days of its release, thanks to Shah Rukh’s business-minded strategy of releasing the trailer on social media platforms like Facebook and WhatsApp, it has garnered an audience of over 7 Crore fans already.

The movie is an action comedy-drama that revolves around 6 “losers” getting together to pull of a major heist. Deepika Padukone, for whom it will be a 3rd collaboration with SRK – Om Shanti Om (2007) and Chennai Express (2013) – plays the role of a dancer named Mohini in the film.

King Khan’s – whose character is named Charlie – multiple looks in the film also has audiences intrigued. For that set of movie buffs who always have a Hollywood comparison track running parallel in their minds, reports say that director Farah Khan herself has claimed that she has “lifted from the Ocean’s trilogy”.

The film which is going to release in Hindi, Tamil and Telgu is produced by SRK’s in-house Red Chillies Entertainment, wife Gauri Khan will be at the helm of productional affairs, while the distribution will be handled by none other than Yash Raj Films.

If Happy New Year succeeds at the box office – hard to believe anything contrary – it will be director Farah Khan and Shah Rukh Khan’s hat-trick feat – Main Hoon Na (2004) and Om Shanti Om (2007) were both box office money-spinners.