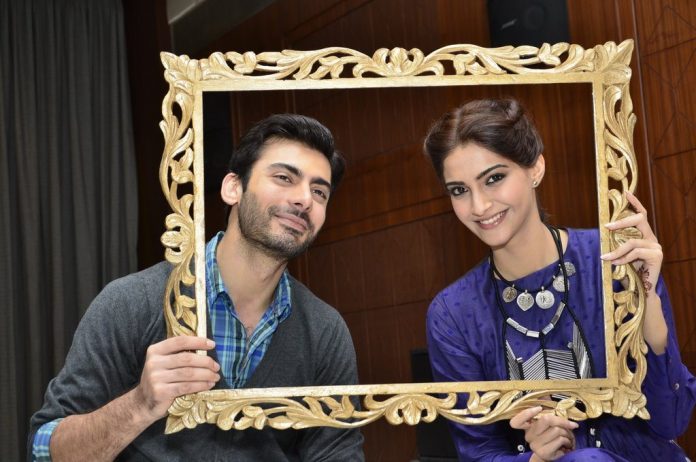 Khoobsurat gears up for release, Sonam Kapoor and Fawad Khan promote in Mumbai.

Sonam looked her fashionista self in a flowing royal blue outfit paired with an unconventional neckpiece.  Pakistani actor Fawad, who will be making his Bollywood debut with Khoobsurat, looked dapper in a simple but stylish pair of denims and a shirt, paired with a grey buttoned sweater.

Khoobsurat is produced by Rhea Pillai, Anil Kapoor and Siddharth Roy Kapur, and is based on the 1980s movie with the same name which starred Rekha and Rakesh Roshan.

Sonam will take on the role of a vivacious Dr. Milli Chakravarty who becomes an in-house doctor for a royal family in Rajashtha, what ensues is an obvious love story between Sonam and Fawad – who is the royal family’s heir.

The romantic comedy flick is all set to hit the theaters on September 19, 2014.