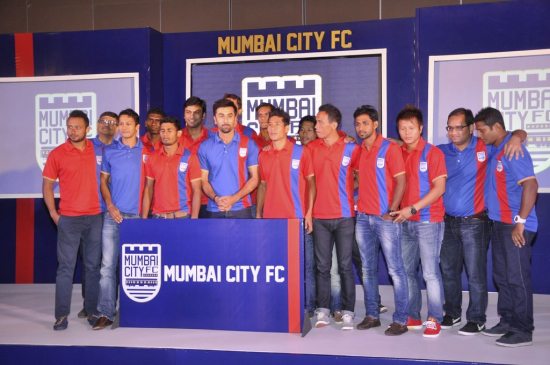 Superstar Ranbir Kapoor has officially launched his Indian Super League team – Mumbai City FC. Ranbir is the co-owner of the Mumbai franchisee along with Bimal Parekh. He launched the team logo at a press conference held at the Palladium Hotel, Mumbai on August 30, 2014.

The ‘Yeh Jawaani Hai Deewani’ star was wearing a t-shirt with the team’s colour – blue and red. He was accompanied on stage by his father, Rishi Kapoor and ‘Mumbai Indians’ owner Neeta Ambani.

Ranbir, who is a die hard Barcelona fan, addressed the media and said, “I could never have asked to get more than the Mumbai franchise. It is the city I’ve grown up in and a city I love. We have many plans for the future and I hope we can make all of them come true.”

After the grand success of the recently concluded Pro Kabaddi League, organizers have started the Indian Super League which is associated with football. The competition will begin on October 12, 2014 with the last match being played on December 20, 2014.