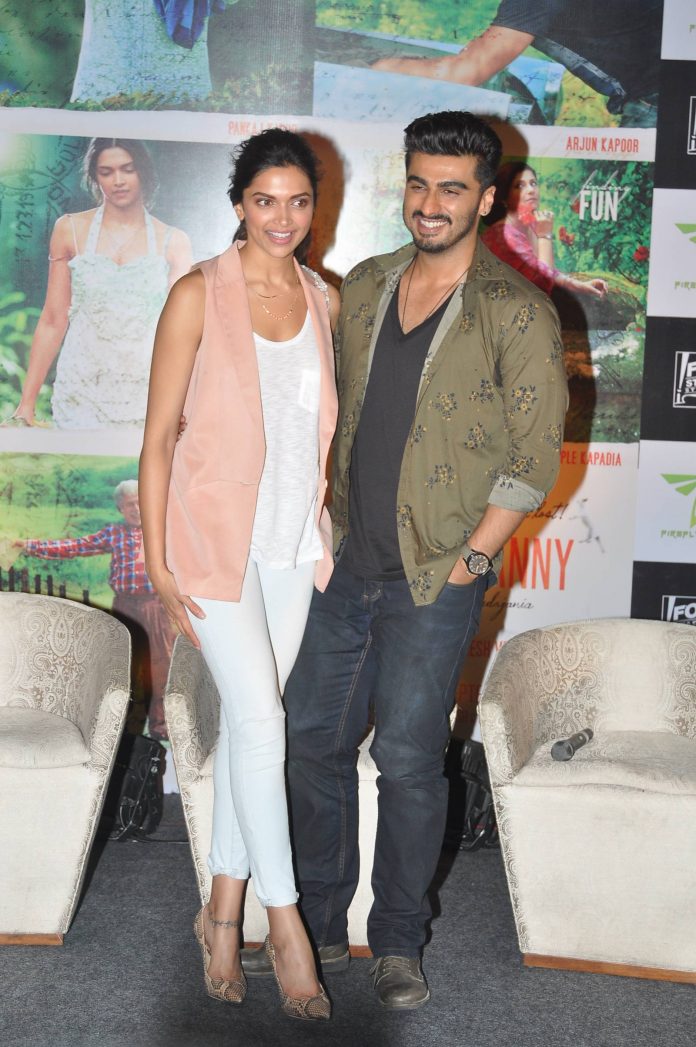 2014 is a year of new on-screen pairs for Bollywood, there is the bubbly Parineeti Chopra being paired opposite Aditya Roy Kapur (Daawat-e-Ishq), newbie Shraddha Kapoor with Shahid Kapoor (Haider) and now, adding to the Kapoor hat-trick is Bollywood hunk Arjun Kapoor opposite leggy lass Deepika Padukone in ‘Finding Fanny’.

29-year-old hunk Arjun is 3 films old, while the sultry Deepika has a bevy of Bollywood blockbusters backing her, but still, they both seem to ooze a quirky on-screen chemistry, atleast thats what Finding Fanny’s trailer is telling us.

Set in the scenic locales of old Goa, the film revolves around an ensemble of slightly eccentric characters in search of “Fanny”. Veteran industry actors like Dimple Kapadia, Pankaj Kapoor and Naseeruddin Shah play pivotal roles in the film.

The duo have been on a promotional whirlwind for their upcoming Homi Adajania film which is all set to hit the theaters on September 12, 2014.

Numerous photo op’s and promotional events later, here’s what the shutterbugs have recorded of the two who are unabashed about their on-screen romance seeping into real life!

Who says adults can’t be duck face pouting and funny face-making teenagers! Arjun Kapoor and Deepika Padukone take promo events photo ops to the next level with their playful energy.

Tinsel town is know for its hook ups and break ups gossip cycle, but you can’t blame us for churning out rumors about these two. After all, pictures never lie!

On stage or off stage the two exhibit all the quintessential traits of a Bollywood couple, on-screen or off-screen?! umm.. we leave the decision to you!