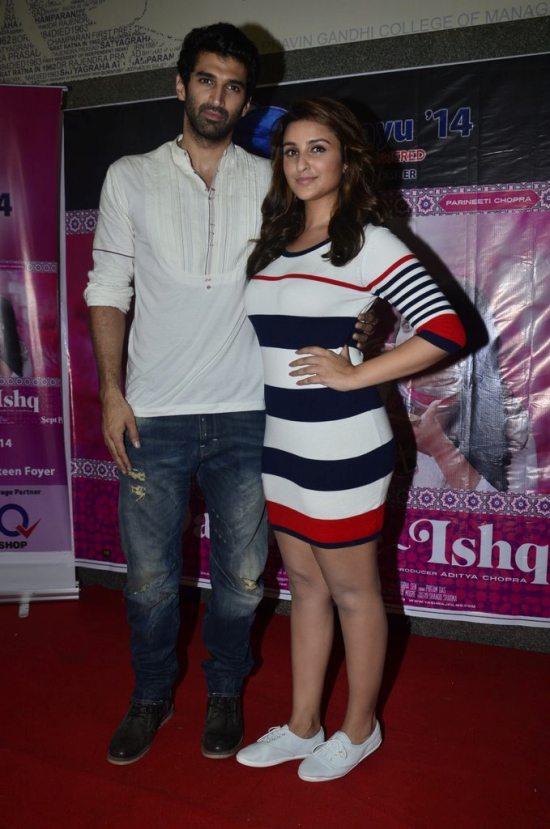 NM College got a taste of glamour when Bollywood stars Parineeti Chopra and Aditya Roy Kapur came to promote ‘Daawat-e-Ishq’ on Friday, September 5, 2014. The duo enthralled the audience with a bit of song and dance from the soundtrack of the movie.

Parineeti and Aditya will be playing lead roles in the upcoming movie. The film is directed by Habib Faisal and produced by Aditya Chopra under his banner of Yash Raj Films.

Parineeti will be seen playing the role of Gulrez “Gullu” Qadir – a Hyderabadi shoe sales girl – who is disenchanted by the notion of love and marriage, thanks to her unfortunate encounters with dowry crazed men. Aditya plays the role of a Lucknowi cook who has the ability to charm anyone with his biryani and kebabs.

This is the second time Parineeti and Habib Faisal will be working together after ‘Ishaqzaade’ (2012).

The music for the movie has been composed by duo Sajid-Wajid and the lyrics have been penned down by Kausar Munir.

‘Daawat-e-Ishq’ also features Anupam Kher and Karan Wahi in supporting roles and is all set to hit the theaters on September 19, 2014.