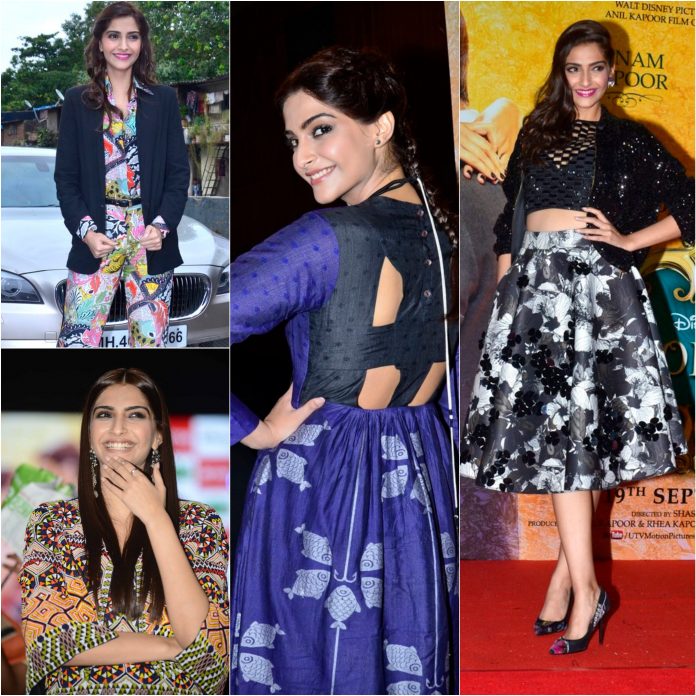 If there was ever a Bollywood actress who truly deserved the title of a fashionista – it is Sonam Kapoor. This star kid made her Bollywood debut with Sanjay Leela Bhansali’s magnum opus ‘Saawariya’ (2007) opposite fellow newbie Ranbir Kapoor. The film’s success is debatable, but it definitely put Sonam under the media’s spotlight.

The actress who earlier claimed to be a hefty 95 kgs now flaunts a lissome and enviable figure. Post a few fashion debacles in her early stumbling days, Sonam is now the official fashion diva of Bollywood.

The 29-year-old has been on a promotional whirlwind tour for her upcoming film ‘Khoobsurat’ opposite Pakistani heartthrob Fawad Khan. The film is all set to release on September 19, 2014.

From funky floral prints to geometric eccentricity, Sonam has flaunted it all, let’s take a quick recap of the ‘I Hate Luv Storys’ actress’ print obsession in the recent past.

Sporting an all black ensemble, Sonam was at the music launch of Khoobsurat.  The floral print knee length skirt paired with a shimmery black crop top, made for a classic yet chic look. The hints of purple on her exquisite shoes and earrings added just the right touch.

Bordering on the Bohemian, this matching printed jacket paired with a tunic-style top made for a completely stunning look. Sonam and Fawad were at a CSR event while promoting Khoobsurat in Mumbai.

If this was on display at a store, we wonder who would pick it up, but Sonam manages to flaunt this slightly unusual style effortlessly.

A long flowing gown with silver fishes printed on it, coupled with a tribal-like necklace, would you buy it if you only heard the description? We don’t think so, but Bollywood’s couture queen Sonam carries this uber unconventional creation with no qualms.

While promoting ‘Khoobsurat’ on TV show ‘Entertainment Ke Liye Kuch Bhi Karega’, Sonam took to geometric fashion. A simple pattern yet a stylish effect and those exquisite earrings deserve all the attention!

Sonam takes colourful patterns to the next level with this ultra stylish jumpsuit while promoting Khoobsurat at Mumbai’s popular suburban college Mithibai College. Any other leading lady would have had a moment of doubt before donning such an multicoloured  ensemble, but Sonam, no!

Rani pink paired with ethnic Indian prints and designs, Sonam not only bags the best style trophy, but also nails the “dress according to the event” prize.

Pulling of the ultimate “girly look”, Sonam wowed onlookers with her fresh and floral style at a Navbharat Times press event in Mumbai.

If viewed on hangers individually, none of these garments would seem to match, but once this 5 feet something diva dons them, they sync in fashionable harmony.

Well, we must throw our hats off to the actress’ stylist who churns out these delightful sartorial creations, which manage to keep the Kapoor girl in the limelight!