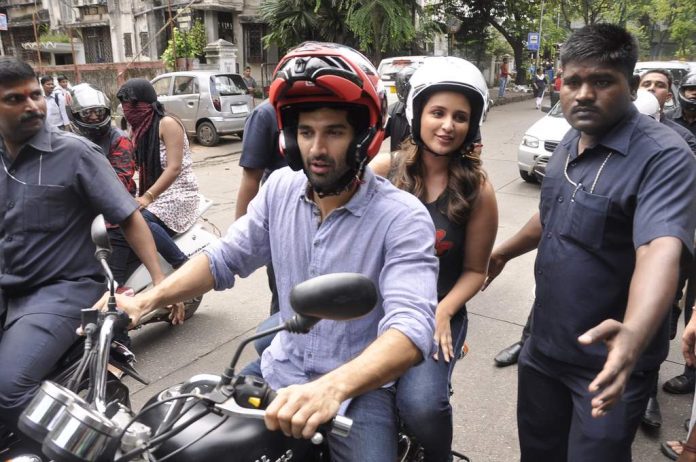 Bollywood stars Aditya Roy Kapur and Parineeti Chopra stopped by Parineeti’s house in Ambala while they were on their Food Yatra to promote ‘Daawat-e-Ishq’. The young hunk very obviously attracted throngs of excited fans, the film is all set to release on September 19, 2014.

Throughout the Food Yatra, the lead actors were surrounded by tight security, but no amount of guards could stop exited fans from getting a close look at the lead pair. The ‘Shuddh Desi Romance’ actress was overwhelmed with emotion as scores of people from her hometown wished her success for ‘Daawat-e-Ishq’.

Parineeti’s family and friends gave a warm and grand welcome to Aditya in quintessential Bollywood style – band baaja and much more! The young lad was a total crowd pleaser and obliged fans with numerous photo ops!

Parineeti and Aditya were treated with a home cooked meal, after a long winding Food Yatra journey, post which they moved on to Chandigarh where they ended their tour at ‘Pal Da Dhaba’.

The Food Yatra started off with a south Indian breakfast corner in Mumbai where the actors enjoyed delicacies from the south with a twist.

The movie ‘Daawat-e-Ishq’ is all set to hit the theaters on September 19, 2014. The Parineeti and Aditya starrer has been directed by Habib Faisal and produced by Aditya Chopra under the banner of Yash Raj Films.