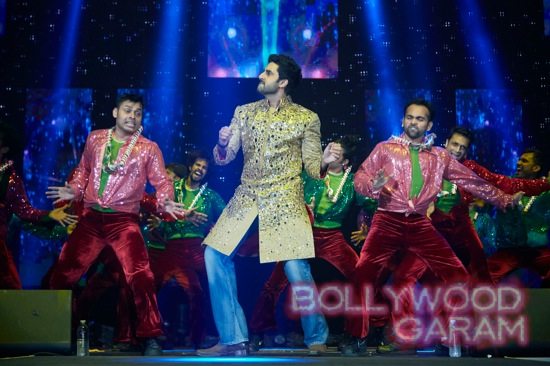 The entire team of ‘Happy New Year’ – Shahrukh Khan, Farah Khan, Deepika Padukone, Abhishek Bachchan, Boman Irani and Sonu Sood – made sure that audiences at the Sears Centre Arena, Chicago had a great time on September 26, 2014.

Malaika Arora, Vivaan Shah, singer Kanika Kapoor set the stage on fire with their performances. The team is on a USA SLAM tour to promote their upcoming film.

The actors stopped by Chicago after taking New Jersey, Houston and Washington DC by storm. The crowds at the venue were treated to some quintessential Bollywood music and dance.

The SLAM tour for Happy New Year kicked off on September 19, 2014 in Houston.

The highlight of the show was when the superstar of Bollywood – Shahrukh Khan played – a game with the audience and a couple from the crowd won a luxury bike.

According to the dates of the tour, the entire team is expected to return India on October 6, 2014 after which, the Indian tour will kickoff.

Farah Khan’s ‘Happy New Year’ is one of the most awaited movies of the year and is all set to hit the theaters on October 24, 2014 – which marks the festival of Diwali in India.

The movie will be released in Hindi, Tamil and Telugu languages across numerous theaters in India.