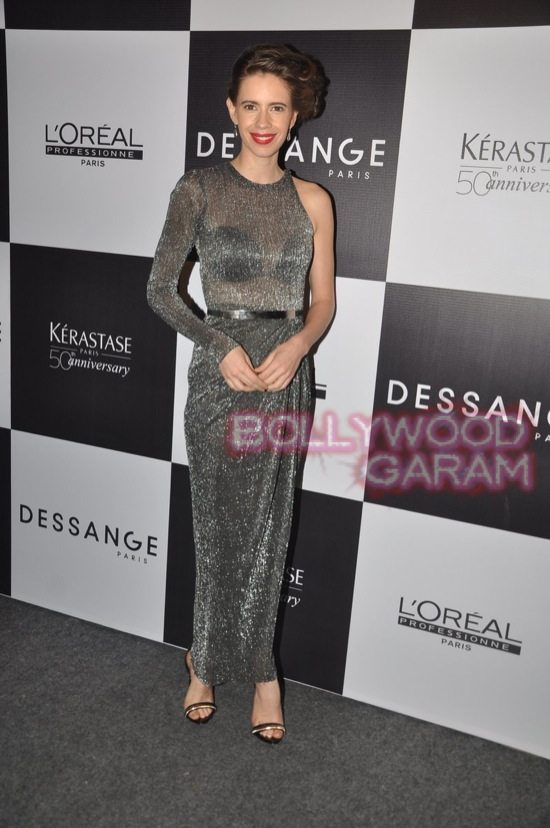 The Dessange Paris bash saw a ‘sheer’ surprise as Kalki Koechlin dazzled her way in.

Kalki’s one-sleeved sheer grey gown was accessorized with a slim black and gold belt and strappy black sandals. Completing her look was a stylish braided bun and loud red lipstick.

The actress will be seen next in romantic comedy ‘Happy Endings’, which is slated for a release on November 22, 2014 release. The movie stars Saif Ali Khan and Ileana D’Cruz and is a satire and an observation of the modern Indian man and woman. Directed by duo Raj Nidimoru and Krishna D K, it also stars Govinda and Ranvir Shorey in key roles.

Kalki will also be seen playing the role of Laila in ‘Margarita With A Straw’, a free-spirited girl with cerebral palsy who discovers her sexuality as she gets involved in a relationship with a fiery young activist Khanum (Sayani Gupta). It also features veteran actress Revathi, Sayani Gupta, Kuljeet Singh, Hussain Dalal, Malhar Khushu, Jacob Berger and Tenzin Dalha.

Directed by Shonali Bose, ‘Margarita With A Straw’ made its world premiere on September 8, 2014 at the 2014 Toronto International Film Festival and will see a release in India in 2015.