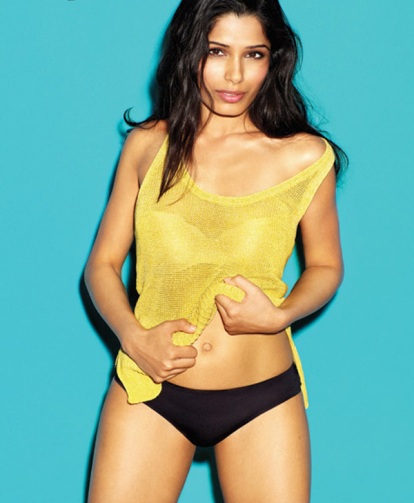 Indian actress Freida Pinto, after the success of ‘Slumdog Millionaire’ has now become a popular face in India as well as abroad. The actress recently featured in a hot photo shoot for the April issue of the men’s magazine ‘Esquire’.

Pinto in the photo shoot has posed in a vest and panties looking hot like never before. In an interview with the magazine the actress even became candid about the nude scene in her latest movie ‘Trishna’ which is an Indian set reworking of Tess Of The d’Urbervilles.

Pinto in the movie for a moment appears naked in a love making scene directed by film maker Michael Winterbottom. But recently the actress admitted that she had used a body double for one of the sequences.

When asked how it felt while shooting the scene, the actress said that it was difficult but the crew was small and did not make their presence felt. However the audience should not expect Freida to appear frequently in the naked scenes as the actress insisted that the script has to justify them. The actress has been dating her co-actor Dev Patel since long and in an interview she also revealed that she had a crush on the Hollywood star ‘Leonardo Dicaprio.