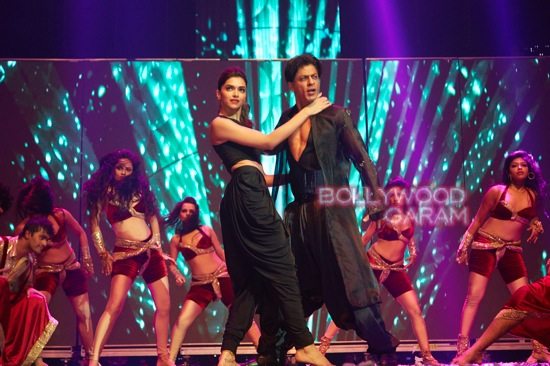 The electrifying ‘Happy New Year’ team rocked Vancouver and San Jose during the SLAM Tour with some foot-tapping performances. Shahrukh Khan, Deepika Padukone, Sonu Sood, Boman Irani, Malaika Arora and Vivaan Shah made sure that the audience at the venue had a great time on October 3, 2014.

The show also saw director Farah Khan taking centre stage as she joined the other actors of HNY. The pictures of the event have suggest that the audience were having a great time. During the show, King Khan interacted with fans and a few lucky ones got to share the stage with the ‘Badshaah of Bollywood’ himself.

Singers Yo Yo Honey Singh and Kanika Kapoor also entertained the audience with their voice. The Happy New Year Team travelled across the United States as a part of the SLAM tour which promoted the upcoming movie which is all set to hit the theaters on October 24, 2014.

The audience is in for a treat during Diwali. The HNY team travelled Washington DC, New Jersey, Chicago, Houston and landed in Vancouver leaving a mark of Bollywood throughout the country. The movie will feature special appearances by many celebrities including Dino Morea, Prabhu Deva and Anupam Kher.